To conclude our special feature of Writer of the Week, BollyCurry presents a man who has played a significant role in the development of Indian cinema and has taken it to heights that very few have dared to venture before. We talk of none other than the magnanimous Mani Ratnam.
Ratnam is among those few individuals whose creativity has been praised in unison by various sectors of the Indian film fraternity and the nation alike. He started off as an aspiring amateur before slowly climbing the ranks and eventually receiving critical acclaim from various juries for his thought provoking contributions to society through his films. Thus far, he has directed in various avenues including Tamil and Malayam cinema and has been awarded with the fourth highest civilian award of the country, the Padma Shri (2002), along with numerous other acknowledgements at international film festivals. It is therefore safe to say that Ratnam has made India and Indians around the world proud of his varying accomplishments. 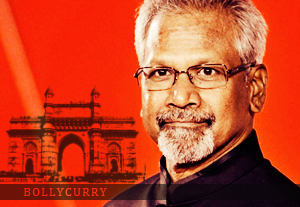 Ratnam made his directorial debut with the Kannada film Pallavi Anu Pallavi (1983), which earned him his first Best Screenplay Award at the Karnataka State Film Awards. At this point, the plots of his movies focused on real life issues that were bound to trigger deep emotions from his audience. However, it was only after Mouna Ragam (1986) and Nayagan (1987) that he finally received national recognition and much overdue acclaim. Ratnam then tried his hands on a romantic film titled Geethanjali (1989). Considering that his forte lay in reality events, it wasn't expected that the movie would leave a mark at the Box Office. However, the film did fairy well and his loyal viewers applauded his initiative to broaden his spectrum.
With regards to his direction and screenplay work, Ratnam is known to dwell deep into the soul of his characters to give the audience an inner-character experience rather than taking them for face value. The movie Anjali (1990) is a prime example where the plot revolved around the life of a mentally challenged girl in the last stages of her life and the emotional setback and trauma her family undergo due to this. Originally conceptualized in Tamil, the film was later dubbed into two other languages - Hindi and Telugu - after receiving global acclamation and a nomination for the the Best Foreign Language Film at the Oscar Academy Awards 1990.
Roja (1992) is another of Ratnam's glorious works; a film essentially focusing on terrorism and its political consequences in Kashmir, India. His combination of a political drama alongside a heart-wrenching romance was praised at various occasions. The film received three National Awards including a Best Director Award for Ratnam, parallel to a nomination at the Moscow International Film Festival.
Another social issue depicted on-screen by Ratnam was the incident of a Babri Masjid in Ayodhya through the film Bombay (1995). The plot centered around the varying religious opinions between different sects, which then led to the Bombay Riots. Once again, the movie was hugely applauded and was warmly welcomed at the Box Office, making Bombay the biggest gross earner of the Chennai Film Industry in 1996. Ratnam was honored with a Filmfare Best Director Award, alongside the Spirit of Freedom Award at the Jerusalem Film Festival.
Other films such as Thalapathi (1991), Iruvar 1997) Dil Se (1998), Kannathil Muthamittal (2002), Saathiya (2002), Yuva (2004), Guru (2007) and Raavan (2010) are few among Ratnam's priceless gifts to the film world.
Ratnam undoubtedly deserves all the name and fame due to him after helping to raise the profile of the Indian Film Industry to a global position. His rare and fresh concepts have provided many with food for thought and continues to ask questions about today's society that others seem to happily ignore. BollyCurry wishes Mani Ratnam a blissful life ahead and hopes that the present and future directors are daring enough to even produce an inch of his offbeat yet incredible work.
Writer: Shikha A.
Editors: Sonia R. and Jenifer Y.
Graphics: Shikha A.
Do you have a suggestion or comment for BollyCurry? Drop us a PM at  BC_Dropbox today.
11 Likes

Cause of Death Revealed: 'This Is Us' Writer Jas Waters