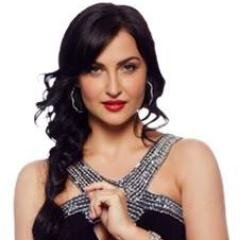 Swedish-Greek actress Elli Avram admits to being the weakest among all the contestants this season in reality show 'Bigg Boss' but says she would have loved to celebrate X-mas in the 'Bigg Boss' house.

Elli is the latest to get evicted from 'Bigg Boss Saath 7' house.

Although the 23-year-old, seen as a cheerful and pleasant personality inside the house, was prepared for the eviction, she is little disappointed after being eliminated.

"I am a bit sad because I didn't want to get evicted. I wanted to stay a bit longer. It would have been fun to stay in the 'Bigg Boss' house till Christmas. After all it's a one time experience," Elli, who made her Bollywood debut with 'Mickey Virus' told on the phone from Mumbai.

"I was prepared for the eviction. I was thinking that as compared to the other contestants, I was the weakest," added the actress who celebrated Diwali inside the house.

Elli has come out with good memories.

"I really enjoyed staying in there, even when I was feeling low and confused. When I entered the house, I had no strategy in mind. I just wanted to be myself and have fun," she said.

In the show, Ellie enjoyed a good camaraderie with fellow inmates VJ Andy and Sangram Singh.

Asked, who is being fair in the game, the actress was quick to answer: "I think it is Sangramji" and added: "I think Kamya Punjabi is putting up a fake face."

When 'Mickey Virus' came out, Ellie was inside the house, but says she would often imagine people's reaction. But her co-star Manish Paul's visit was motivating for her.

"I was imagining that all of them would be sitting and watching the movie and what would be the excitement! I was very happy when Manish Paul came inside the house to meet me. He said, 'Elli you are doing this very good." This made me realize that everyone is happy.

"But obviously, I was little sad that I wasn't out there with everyone," said Elli.

After "Bigg Boss", she wants to focus on her acting career and says that she would love to work with Salman Khan, who is also the host of the game show.

"He (Salman) is a huge star and a great actor. It would be a great honor to work with him. I think, everyone wants to do a movie with Salman Khan," she said.

"I would like to do different kinds of roles in future -- from a girl-next-door to a Lara Croft," she added.

riya_ss9 7 years ago No worries, Sallu Miya is smitten with you and till he gets fed up, take full advantage of it.

Ninja. 7 years ago No worries re! Sallu is already smitten by you re. He always helps his girls with film offers re. More importantly, you remind him of Katrina Kaif re.

sonia_koolkhan 7 years ago missing u elli . u r most honest person i hve come on across. love u .

Sharif.Badmaash 7 years ago All the best for ur future Elli

insight555 7 years ago Love u ellie...the sweetest and prettiest girl in BB house...

WhiteNights. 7 years ago All the best for future Elli. I love you.