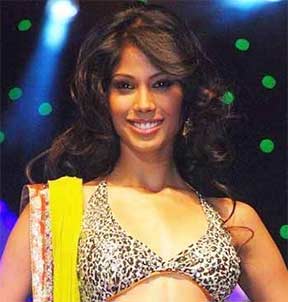 , who made her acting debut with recently released "Yaariyan", says that she would like to be recognized more for her personality and acting than her hour glass figure.

"I do not believe in fitting into stereotypes. I would like to be recognized for my personality and my acting capability. Looks are a bonus. I feel comfortable with my body and I do not believe I flaunt it. However, yes... I am proud of how I am able to maintain myself," said the 23-year-old winner of Miss Earth 2010 featuring on the 2014 Kingfisher Calendar and a regular on fashion runways.

"I would be happy if I were to be recognized for my acting ability some day," added Nicole.

She played the role of Jia, a young and sexy college girl, in Divya Khosla Kumar's film and she says that auditioning for film was the toughest part.

"Auditioning for 'Yaariyan' was tough. My main impediment was speaking Hindi. I had taken French in school, and so this was a challenge for me. Thankfully with Divya and the team's help, I was able to make it," Nicole said.

She also felt that there is no rule that needs to be followed for getting into acting. However, formal training is needed.

"I do feel that getting formally trained is a big help, even if you already are a natural as an actor. Initially we just have to follow what we are told, but I guess all actors will develop their own style as they get to be more experienced and successful. Life, I believe, is a true learning experience and I continue to learn as I move ahead," she said.

Entering the film industry was like a movie script for Nicole. Modelling was her first stint in the limelight. From there, she went on to become Miss India, first winning at the southern level and then at the national Level. This changed things for her as a model and winning the Miss Earth international pageant in 2010 changed her life forever.

"Till then, no other Indian pageant winner had won an international pageant for 10 years. I also happened to be the only Indian to have won the Miss Earth Title. This gave me a lot of media and pageant attention. I loved it. When I got a call to audition for T-Series, I knew that the universe was backing up my plan. Now, I am determined to make it as an actor," she said.

Nicole, who schooled and graduated from Bangalore, credits her parents for being her "inspiration" as she walked up the stairs of success. She first got into the world of fashion as a 15-year-old, working in the industry in Delhi and Mumbai and also in Colombo.

So, what is more gratifying - facing the camera or walking the ramp?

"Each has its own challenges and each has its own highs. I would say that both are good, but I would prefer to go forward as an actor as it gives me many more options... A good ramp model may not make it to acting. I am glad I got an opportunity to be in Bollywood," Nicole said, adding she would love to play a role like Angelina Jolie in "Mr and Mrs Smith" in Bollywood.