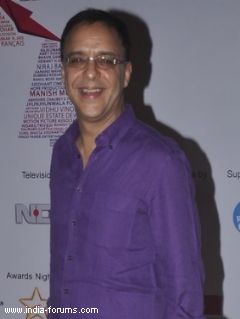 Filmmaker Vidhu Vinod Chopra said that when he produces a film, he contributes to it and works along with directors but doesn't go on the sets.

He believes that filmmaking is a team effort rather than just one individual's work. The producer of films like "Ferrari Ki Sawaari" and "Parineeta" says he has complete trust in his directors, but he likes to work with them.

"I work closely with directors. I can co-write or do editing. But I don't go on sets. When we were shooting 'Munna Bhai...', Sanjay Dutt would look at me instead of Raju (director Rajkumar Hirani) and ask me if the shot was okay. After that, I chose not to go on the sets," said Chopra, who likes to make movies that will make him proud and happy and also recover money, here Sunday.

During the ongoing Film Bazaar's "Master Class with Vidhu Vinod Chopra: a dialogue between Filmmakers", he also shared that he is surprised by the long association between him and Hirani, with whom he has made films like "3 Idiots", "Munna Bhai M.B.B.S" and the forthcoming Aamir Khan-starrer "PK".

"With Raju, it's crazy it lasted for so long. No agreement was signed between us," said Chopra, who calls himself "not a pleasant or likeable guy".

The filmmaker, who doesn't mind using cuss words, says he was so "insecure" that he used "offence as a defence mechanism".

He might describe himself as someone who can't make himself "likeable", but there must be many filmmakers who would like to thank him.

"I reach out to young filmmakers because nobody helped me when I wanted to release 'Khamosh'. No one bought it for a year. People from the industry sent me flowers and appreciated it, but no one was willing to buy the film," said Chopra, who has also worked with directors like Rajesh Mapuskar and Pradeep Sarkar.