Mumbai, Jan 16 (IANS) While sister Zoya Akhtar is busy putting finishing touches to her script and casting for her first directorial venture 'Luck By Chance', brother Farhan is in a quandary.

He cannot start his film until he knows for sure when 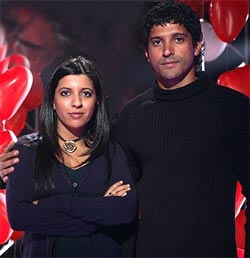 Featured Video
she intends to start her movie.

'I'm certainly not going to start my new film 'Voice From The Sky' at the same time as Zoya. Either she makes her film first or I. Never together,' Farhan told IANS.

Farhan, who has films like 'Dil Chahta Hai' and 'Don - The Chase Begins' to his credit, has to bear the brunt of working on two projects simultaneously.

'I've seen what two overlapping productions can do. My only regret about my assistant Reema Kagti's first film 'Honeymoon Travels Pvt Ltd' is that I couldn't give ample time to its supervision because I was busy with my 'Don'.

'In fact, I was even supposed to play the role that Abhay Deol did in Reema's film. I missed out on it only because of 'Don'. Too bad! It would have given me a chance to fulfil a childhood fantasy, of playing Superman. Never mind! I'll make sure that I'm there for my sister Zoya's film when she starts.'

'Voice From The Sky' will have kids at the helm.