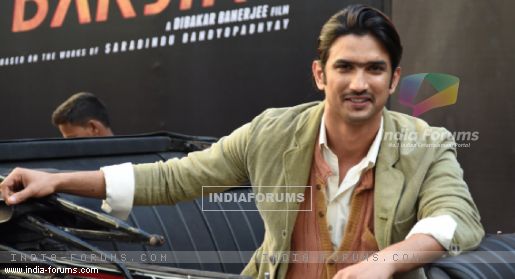 In showbiz, actors are often hounded by questions over their speculated look in their next project. But actor Sushant Singh Rajput says it is getting into the skin of the character that is difficult, not the changes in physical appearance.

"I think it (changing look) is very simple. I'm normally asked and I guess other actors are also asked questions related to body language, look, lost or gained weight. These are very fundamental and easy things that we do while preparing for the character," Sushant told IANS during a candid chat here.

What's more "complex" is "understanding the character", he said and added: "Sometimes we finish the entire movie and we still don't understand the character. So, that is the thing we need to crack."

Now, Sushant is seen sporting long locks as a prep for Neeraj Pandey's "M.S.Dhoni - The Untold Story". The film is a biopic on the Indian cricket captain.

However, the actor, who was last seen in Aamir Khan starrer "P.K.", doesn't rule out importance of looks while showing someone else's life on silver screen.

Talking about his current look, he said: "The reason I have long hair, a certain diction or a certain body language is very difficult to understand. Yes it is important, because right now he (Dhoni) is there and everyone knows about him. I cannot give the audience a jerk by not looking like him. But these things are very easy," the actor said.

Meanwhile, the actor is gearing up for Dibakar Banerjee's film, based on Saradindu Bandyopadhyay's well-known and successful fictional detective Byomkesh Bakshy. A contemporary interpretation of Calcutta (now Kolkata) during the 1940s, it is slated to release on April 3.