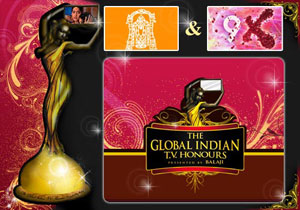 The verdict is out…The Oscars of Indian television 'The Global TV Honours' announced their winners in a grand ceremony held yesterday at the Andheri Sport Complex. A galaxy of stars from Bollywood and Indian television industry walked the red carpet for this Indian Oscars of television. The awards presented by Balaji Telefilms will be telecast on 9X.

The battles were close in practically every category, but at the end, when the dust settled, this is how the picture looked:

In the Special Honours category

In the Programming Honours


In the Popular Honours category


In the technical Honours category


And that's not all; the performances were stunning as well. The night was filled with excitement as Ronit Roy set the stage on fire with his opening act. Dancing with the Brazilian troupe on Hindi numbers like 'Hare Krishna Hare Ram' 'Welcome'. Tushar Kapoor, Shabbir Ahluwalia, Rohit Roy kept the excitement going with their 'Bad Boy' Act on Ganpat remix.

The famous mundas of television Eijaz Khan, Karan Patel, Jay Bhanushali, Sharad Malhotra tried to woo the soni kudi Lara Dutta in a fun-filled act that provided the viewers with the perfect balance of Bollywood and Television.

A very special treat- for the very first time the platform was shared by the winners of both Jhalak Dikhla Ja and Nach Baliye - Prachi Desai & Deepak and Sanjeeda & Aamir Ali.

The icing on the cake was the stupendous performance by none other than the Bollywood ka Baadshah Shah Rukh Khan. His first ever performance for a television awards show mesmerized audiences with his reminiscent fauji look. Choreographed by Ganesh Hegde this was a tribute to the television industry and all the leading ladies of television who have created an identity for themselves through their characters they portrayed. The act introduced each member of his Chak De team - Navneet Nishan, Neena Gupta, Smriti Irani, Gautami Kapoor, Sakshi Tanwar, Rajshree Thakur, Mona Singh, Anita, Prachi Desai and Divyanka Tripathi.

Catch all the glitz, glamour and excitement when the spectacular ceremony will telecast only on 9X

+ 2
14 years ago i cant belive this yr all da popular awards went to prachi desai..how baised..

live4hitengauri 14 years ago hw come there is no mention that GauriHiten won the jodi award,and when it's gonnaa telecast on 9x,can't wait to see GauriHiten

+ 2
14 years ago I just wanted to read....how many awards went to K serials and how many digs they tried at others... and did any of the deserving won teh big awrds...