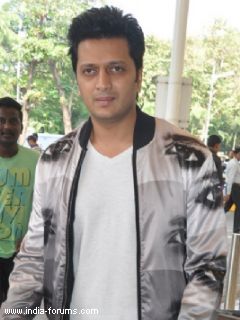 Riteish Deshmukh, who starred in "Kyaa Kool Hain Hum" and its sequel "Kyaa Super Kool Hain Hum", may not be part of the third instalment of the franchise, but he is expected to make an appearance in the upcoming adult comedy.

Tusshar Kapoor and Aftab Shivdasani, who were part of the cast of the first two movies, recently shot for popular comedian Kapil Sharma's show "Comedy Nights With Kapil". And Tusshar took to Twitter to share the news with his followers.

After this, Riteish sent his best wishes to the film's team.

"@TusshKapoor @KapilSharmaK9 @AftabShivdasani Kyaa Kool Hai Hum 3 - is going to be bigger than ever - good luck my brothers," he commented.

Tusshar asked for Riteish's support and tweeted: "@Riteishd it's your franchise, too, you have to support us throughout, aapko darshan toh dene padenge!"