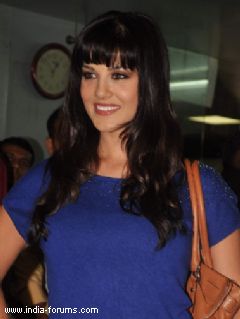 'Why do they want to censor Facebook, when they don't censor Sunny Leone,' Thakur asked a day after Communications Minister Kapil Sibal advocated screening of inflammatory or offensive content on social networking sites.

Congress leader and Lok Sabha MP Shashi Tharoor, who had Tuesday 'rejected' censorship for socal media, however, said that after an expostulation from his colleague Kapil Sibal he felt some restriction was needed as Indian politics and society was not as mature as in the West.

'I talked to Kapil Sibal, he told me that there were inflammatory images of gods, goddesses, prophets. When I saw those, I felt there is a problem. Free speech in India is not the same as in the West,' he said at the conference.

'If certain people see these images, it can cause violence, we don't have a democracy so mature that we can ignore such things. So certain amount of restraint is necessary,' he said.

'Inflammatory communal incitement is like a match at a petrol pump, why should we do that?' Tharoor argued, adding in good measure, however, that he was against censorship.

Contradicting him, Thakur said social media was a platform for common expression and should be allowed to grow and become mature.

'Social media should be given time to get mature,' said Thakur, adding that it should be left to the social media to create ways of removing objectionable content.

Sibal had Tuesday said the government will not allow social networking sites to host 'objectionable' content and will take steps to screen and remove these.

Ravinshh 8 years ago nO ONE HAS THE GUTS AS pb jp AND sKY ARE STANDING BY HER.

Ruhhee 8 years ago I will say many teenages watches BB and in India it's like no one knew SunnyL before she came on the show..so it's true wen they said that there have been miilion of search on her by teenages to c who she is and they were exposed to an adult site which is really baddd dont have anything against her but Colours channel shud have thought of this before cause BB is watch mostly by youngsters in India ..she shud not have been brought in this show just to protect the youngs one when i said teen it's children from 10 onwards has been searching her site..the blame shud be on the Colours like someone said pull the plugged on colors...to protect the kids ...i will say..if colors do show for adults they shud put the parent guidance warning or telecast after 11pm but still kids will be curious anyway, so yyy do things like that colors...veryyy upset with channel ...need to take action...

-Saibo- 8 years ago Are we suddenly becoming china. Ow? Wtf.

smallwonder 8 years ago Is this guy mad or what? What has sunny leone done on big boss that needed to be censored? Crazy fellow... Some people just have to speak for the sake of it... Specially politicians - whose sole aim is oppose everything that the ruling party does with idiotic explanations as this...

sehar mehrotra 8 years ago I don't know anything about Sunny leon so I'll keep mum on that matter but as for Facebook...its so not done!!!!
People on facebook goups often speak against the ruling government and Mr Sibbal thats the reason why they want screening of the content!!!!

This is ridiculous ...wats the meaning of "world's largest democracy " when everythingwe say will go through a screening and then published!!!!

Medha. 8 years ago What the heck! You can't be serious! I'm sorry, I don't live in India, but how on Earth can you make such restrictions on FB! I live in the USA and I'm only 14 so I know how important it is for children around my age to know about things like this. Children/Adults will only get mature if they are educated more on this! But nope. And why should yall even censor Sunny for that? Dude! It's her profession! Instead of banning sites and stuff, try becoming more open-minded! India's a developing country and I'm sure getting educated on this stuff will do no harm to the people there!

Shaina_b 8 years ago This is like taking away the Freedom of Expression!!!!!!

There is now no freedom left in India!!!!!

-scarlett- 8 years ago The people in India will only learn how to act mature upon this topic if they were educated more on it, whether they're children or adults

ChickenSoup 8 years ago i completely agree with anurag singh thakur...why censor fb when we cant censor sunny leone? censor her first and then think about what to do next!

miss_bennet 8 years ago Well, I do not know Sunny Leone and nor do I watch Big Boss, but censoring FB is just going too far... Whatever happened to the freedom of expression in this country? Religion is just an excuse, they just want to curb ppl talking about them and their goverment...

YRF dismisses Rumors of making a biopic on legendary ...
8 hours ago