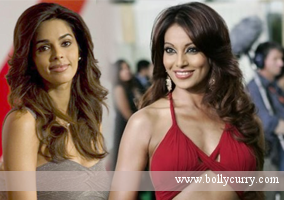 reen beau John Abraham, who debuted with the movie, set the big screen ablaze and their sizzling chemistry set the film's BO cash resigter's ringing as well.
We now hear that not only her fans, but Bipasha too has expressed her desire to be part of the sequel via the recent tweet: 'Was watching clips of all my films and I have to say, Jism is still my favorite! Everything about the film was magical :)' [(c)Twitter]
This update of hers has inspired buzz that Bipasha may still bag a chance to be a part of the sequel. Meanwhile, Mallika too is very keen on being a part of this prized project. But after Bipasha's indirect appeal to be included in the film, it looks like producers Dino Morea and Pooja Bhatt will have to think long and hard before deciding which of these beauties makes it onto the big screen with this venture.
Here's hoping that the film gets its leading lady without adding to B-town's none-too-scant list of legendary catfights, though we daresay, not all would object to that approach!
Editor(s): Lola & Jenifer.
Graphics: Zunni.