View Profile
Ashutosh Gowarikar's "What's Your Raashee" has left Harman Baweja in a tough choice as he needs to choose between 12 different Priyanka Chopras of 12 different raashees & personalities. 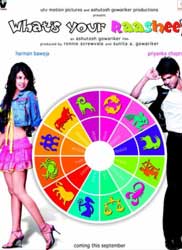 Featured Video
reveal that Priyanka Chopra's raashee has been with her throughout her journey in B Town. There have been many talks that concern who she will gel with. Is it Akshay, Harman, Shahid or Gerard Butler? Everyone has been wondering, who will be Priyanka's lucky boy?


Our insisting discloses that Numerologist Sanjay B Jumaani discovers the mystery and explains the raashee game points. "Priyanka is a double No 9 (Mars) as she's born on 18th and 18+07+1982=9 too," says Mr Jumaani. He then carried on to say, "Just before her birthday this year, she was in her 27th year, and 2+7=9 again, one of her best numbers." This surely explains why PC has been having a number of fantastic hits such as Dostana & Fashion.

This also explains why Priyanka Chopra's on and off-screen chemistry with Akshay Kumar (who is also a number 9, born on 09/09/1967) is remarkable. Mr Jumaani carries on to saying, "Akshay is also an Earth Sign and Priyanka is a 'Water Sign'. Earth & Water have stayed together for ages and therefore they are both extremely companionable. Coincidently other men linked with Priyanka Chopra are too fellow Water Signs!" According to Mr Jumaani, Shahid Kapoor, Harman Baweja & Gerard Butler all share the same sign as Piggy Chops.

Sanjay B Jumaani tells our sources, "Water Signs get attracted to Earth and Water element Signs, but in the case of Akshay, being a Number 9 too, increases the chemistry ratio."

Well we're not sure about that but it seems like we missed out a "Twinkle" somewhere...

What's Your Raashee will be realising worldwide on September 25th 2009