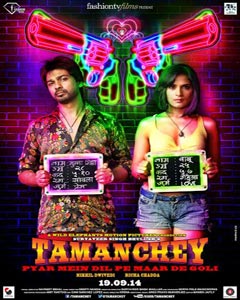 Filmmaker Bharat Ratan Bhushan asserts that he has directed "Tamanchey", but producer Suryaveer Singh Bhullar rubbishes his claim saying that the former is just trying to "blackmail" him.

Earlier it was reported that Navneet Behal has directed the film and his name also appears on the film's poster and in the trailer.

"I have shot the entire film, but then I have been completely sidelined. I was not invited for the trailer launch and neither have they mentioned my name anywhere. I have the copyright of the film as I am the writer and director of the film," Bhushan told IANS.

But Bhullar has a different story to tell.

He said: "Bharat directed just for two days and then he was terminated as we found him incapable. The two days footage was canned."

"I am an independent producer and I have put all that I have into the film. He had moved High Court in 2012. The court ruled against him and the matter was closed. Now, after two years, he has woken up and is blackmailing me. He is a fraud," he added.