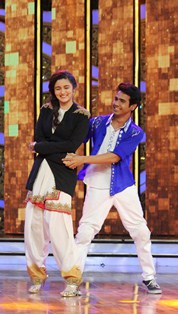 Beginning her Bollywood run with a big banner movie at a young age, Alia Bhatt is barely one movie old and has yet managed to stir up quite a following, especially amongst the young male audiences.

Known for her mischievous charm, the petite beauty is on a roll these days promoting her upcoming film - Highway. Making Dance India Dance Season 4 one of her very first pit stops, Alia had the contestants going crazy after her on the sets.

Welcoming Alia on the sets, the crew showed her an AV of what the boys had to say about her. While Alia enjoyed watching what each contestant had to say about her, she was particularly impressed by Shyam. The talented dancer had expressed the desire to get married to her if he ever gets a chance to kidnap her. Quite amused at the manner in which Shyam expressed his admiration, Alia confessed that she found Shyam to be genuine and thought he was just perfect.

When show's host Jay Bhanushali asked Shyam's mother for an approval, she immediately agreed. Given that she is a brilliant actress, can dance and has now proven her singing skills with a song in Highway' as well, his mother thought of Alia to be the perfect bride for her son. In a bid to impress Alia, Shyam asked her for a dance. Alia greed to perform with Shyam without hesitating even once and the two seemed to be in perfect sync without any rehearsals or retakes. Alia was not just impressed by Shyam's approach but was amazed by his performance as well. Talking about his performance, Alia said, "I am glad that I chose you because after seeing your act... I know for a fact that you are a romantic at heart and you would do all it takes to keep the girl in your life happy."

Shyam's happiness knew no bounds when Alia agreed to his proposal, even if it was just for a dance. While the other contestants still await the Sunehri Taqdeer Ki Topi, looks like he has already won the prize he was looking for on Dance India Dance.

7 years ago Jay Bhanushali - the bestest anchor in d worldd!!!

10 years ago good for him. they both are so energetic and true entertainers...

10 years ago man! iss ranveer ki toh nikal padi! LOL! he is in the news CONSTANTLY. good for him and he deserves all these praises!