Sanjay Dutt seems to be holding a long standing grudge on Shahid Kapoor. The exact reason is unknown but it was Dutt who put his foot down when the makers of his film Kidnap, Shree Ashtavinayak Productions put forth Shahid Kapoor's name as his co-star for the film. 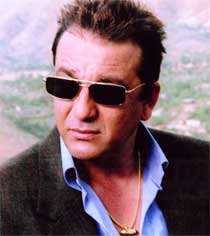 Featured Video
Sources reveal, "This all happened over an year back when the casting of the film was being finalised. Dutt was already on board and hunt for the second lead, a much younger hero was going on. But when Shahid's name cropped up, Sanju baba told the Ashtavinayak bosses that he was not willing to work along with Shahid. He would prefer any newcomer for the role but Shahid. In a tizzy after this surprising reaction by Dutt, the official put forth options of Kunal Khemmu and Harman Baweja. But then that time the director of the film, Sanjay Gadhvi (Dhoom and Dhoom 2) suggested Imran Khan's name. That time his Jaane Tu Ya Jaane Na was under production and Gadhvi had probably seen rushes of the film and was all set for getting Imran in his film. When Dutt was told about Imran, he okayed him. A few video tests were taken of Imran wherein the talented youngster impressed them all and he was in the project." Industry sources claim Sanjay Dutt was pissed off by Shahid's behaviour during the making of their only film together, Vaah! Life Ho To Aisi (2005) which was a massive flop at the box office. Dutt was perhaps offended by Shahid not treating him like a major senior co-star and mostly keeping it to himself on the sets. There is also talk that since Salman hates Shahid bigtime after the Rockstars tour in 2006, where Shahid entered the wrong books of Salman by trying to teach him how to dance, Sanjay Dutt was just trying to please Salman by refusing a film with Shahid.