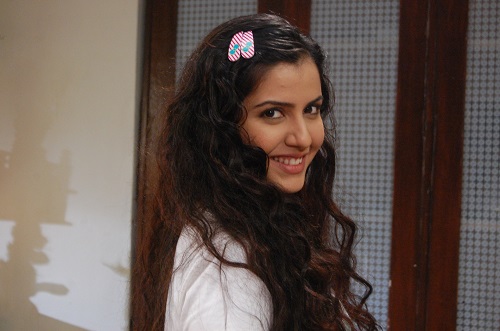 It was an emotional moment for the pretty and bubbly actress Smriti Kalra who is currently seen as Neha in Rajan Shahi's newly launched show Itti Si Khushi on Sony TV.

Yesterday, the entire cast and crew of the show gathered together for watching the first episode of the show together. The team applauded when the show hit the screen at 8 PM. Smriti Kalra and Anuj Sachdeva who are playing the leads in the show were present there too along with the producer Rajan Shahi.

Seeing Neha coming back to her home in the show, Smriti became emotional. We spoke to Smriti as what made her emotional. She said, "When everything is put together, it comes out as something wonderful. Like when we make a picture then drawing just one color doesn't make a picture. If so many things are put together then it comes out as something wonderful. Similarly, we shoot one by one scene but when we see everything combined so it feels great. I became very happy and was left with teary eyed because of happiness."

Smriti's Mom was also present during the event and even she was happy and proud to watch the first episode of the show. We asked Smriti about the response she got from her Mom for her show. She said, "My Mom too became emotional after watching the episode. She really liked it and I am feeling very happy that she attended the party. I am very happy."

Kikidramagirl 6 years ago You're doing amazing as Neha in Itti si khushi so far! Keep it up Smriti Kalra

sujairohit 6 years ago The first episode was very good.Smiriti kalra was adorable and cute as neha.
All the best for the show.

krupaa 6 years ago Smriti Kalra you just nailed it in first episode.
I smiled and cried at the same time.
So many mixed emotions togather

Kaushik.k.RC 6 years ago smriti kalra you made me happy as well as sad with tears in your 1st epi :')

-purpleorchids- 6 years ago Smriti Kalra,loving your portrayal of Neha in Itti si Khushi,that innocence you bring is so heartwarming

|Persephone| 9 years ago I think Joker will be awesome! (even though I am not that big a fan of sonakshi)!!!