View Profile
Yeah, it’s absolutely true that Neetu’s trouser was torn but that’s during a shooting not in real life. In the film “One Two Three” Neetu Chardra, playing the role of police officer, had so tight a trouser to wear that when she pulled her leg to kick in a fight scene the trouser got torn open. Fortunately she had tight inner that day.

Well, it’s not the only incident that made the making of the film “One Two Three” conspicuous. Neetu being the fighting star of the film punched her co-actor Murli Sharma so hard that he couldn’t move for two hours. Now it’s upto you to think about the place where the 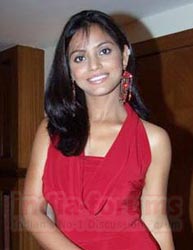 Featured Video
unfortunate guy received the punch. When Neetu was asked about the incident she told in her Bihari style “I don’t know where he got the punch because he didn’t tell me. Actually when I was rehearsing the scene he was absent and when the scene was ok he jumped in at behind my back. Now it’s his misfortune that he stood at the position where I targeted to punch.”

An excited Neetu added, “I am a Taekwondo Karate champion. If my box couldn’t have made such impact then people wound have doubted my championship. But I am really sorry that Murliji had to go through that pain because of my punch.” Neetu further said, “next we were to shoot an action scene with Tushar Kapoor. Tushar was really tensed thinking about the case with Murliji”.
When I mentioned about the torn trouser she told me, “police officer cannot wear baggy trouser. And here people are making much sound about nothing. I expected it to happen and that’s why I wore tight inner”.

All the co-actors of Neetu know very well about her being the karate champion and they never dare to mess with her. As far as “One Two Three” is concerned, we can think less about the action hero like Suneil Shetty, but problem is still hovering on stars like Tushar Kapoor.
-(SAMPURN)