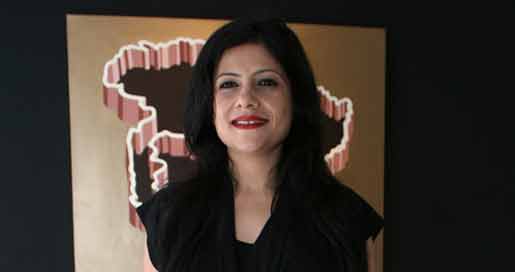 Painting a journey of dusk until dawn through a prism of colours, designer Namrata Joshipura presented her collection 'Night Goddess' at the ongoing Amazon India Fashion Week here. Her line hinges on 1970s' style statements with a mesh of spunk and old world charm.

While exploring the darker realms of night, the range captures style of the 1970s with its cuts and flares. The designer says the collection took a turn towards the period naturally.

"My inspiration is 'Nyx', who is the Greek goddess of the night. So all my creations symbolise my thoughts. I feel the dark and deep has came out in a better way. The collection is reminiscent of 1970s with tan suits, hair tucked back, dress cuts, slits and flares. It was not planned that way, but gradually came out in that form," Joshipura said here post her show on Friday.

She showcased her collection on day three of the five-day fashion gala, which is being held at Pragati Maidan here. The designer also dedicated her collection to the Indian women's hockey team, who won the Hockey World League on March 15.

The designer prepared the audience to enter a mysterious world of night with visuals of a forest, engulfed in darkness. Smoke and green laser lighting added a mystical touch to the story.

Her collection was a perfect example of 'when beauty meets power', with all the muses exuding elegance and sophistication.

The designer wrapped up her collection with fabrics like satin, shimmer acetate tulle, silk georgette, faux fur and neoprene.

Night is not all about darkness, but about the glistening moon as well. So this angle of night was also evident in Joshipura's collection with green, golden and metallic embellishments.

Another highlight of day three was the fashion show by designer duo Pankaj and Nidhi. Their collection 'Rouge Minerale', as the name suggests, was inspired from the world beneath the crust of Earth -- rocks and minerals.

They presented a mosaic of colors from palette of rubicund reds, arctic pink, sapphire blues, carbon grey and burnt sienna to draw a silhouette of evening wear.

Meanwhile, day three of the fashion extravaganza, which is celebrating its 25th anniversary with its new title sponsor, was a bit low on energy. The forum was buzzing with activity only in the evening.

Fashion shows have also been in news for its starry and glam quotient. While the style meter of the fashion gala is high, Bollywood has remained illusive till now.

Shraddha Kapoor and Sushant Singh Rajput are the only ones, who brought glitz of the tinsel town to fashion week since it began on Wednesday.