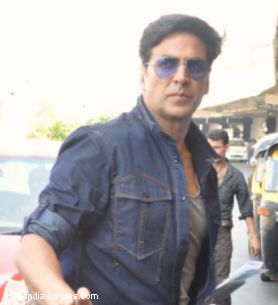 If watching actor-producer Akshay Kumar getting slapped by a monkey in a sequence in "Housefull" was hilarious, the action star's fans will now see a backup dancer leaving her hand's print on his cheek in "Holiday".

The actor, who has mostly beaten the bad guys black in blue on the big screen, gets slapped by a woman in his forthcoming film "Holiday - A Soldier Is Never Off Dut", which also features Sonakshi Sinha. But he says it wasn't anything serious.

Talking about the particular scene, Akshay said: "It was just a funny thing."

"Nothing special was going on in my head. The whole idea is that I tell her why is the girl (Sonakshi) not agreeing with me and she (the back-up dancer) says if she is not agreeing, then I'll come along with you. I said, 'no I want her only'. So, the girl gets angry and slaps me," the actor told IANS.

He plays an army officer in the A.R. Murugadoss directorial, which will release June 6.