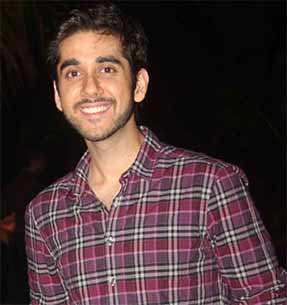 According to eye-witness reports filtering in from locations in Canada, Vinay and Adriene are quite a pair.

Vinay chooses to hide behind the Bollywood clich when asked about Adrien. "It may sound corny, but we are very, very good friends, that's about it. And if this sounds like a Bollywood clich then I am thrilled. I want to be a pukka Bollywood actor," he said.

According to a very close buddy of Vinay, "Initially Vinay and Adriene barely exchanged a few words. He is a very shy guy, very reluctant to open up with people who are not close friends or part of his immediate circle."

Apparently as the shooting progressed the ice between the pair thawed and melted. Now that the film is complete the entire unit is speaking about the couple's sizzling camaraderie.

Said a source from Toronto: "Adrien was there throughout the wedding by Vinay's side. There were performances by Mika and RDB, and Vinay hosted the programme with Rahul Khanna.

"Adrien danced and had a good time. She seemed very comfortable in the Punjabi milieu. They are definitely more than just good friends. Just where they are heading we don't know. But we do know that the two of them are very comfortable with one another."

In "Dr. Cabbie", Vinay plays a doctor from India who migrates to Canada to become a taxi driver in the borrowed land of opportunities and initiates a mobile medical clinic in his cab.