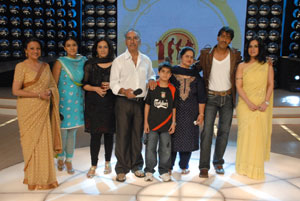 Zee’s Rock N Roll Family gave a reason for Ajay Devgan to smile on April 2nd as they celebrated the star’s birthday in grand style! Ajay, the otherwise reclusive guy who is usually not ready for birthday celebrations had a gala time with the entire Zee family making the day memorable for him! The occasion was graced by the presence of director and music composer Vishal Bharadwaj who was the special guest on the sets.

The Devgans had another reason to party as their film ‘U Me Aur Hum’ is ready to hit the screens very soon. Well, to make the day joyous and more eventful, the actor was shown an AV which revealed the naughty side of Ajay Devgan where he was seen playing pranks in college. Also, there was a clipping of a prank played by Ajay on his wife, Kajol during the making of ‘Raju Chacha’. 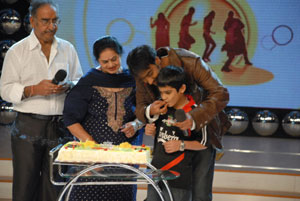 Ajay was touched when he saw his very close friend based in South Africa send out a Birthday message for him, and the actor thanked all for this, as he had seen his friend after a long gap of 10 years. Birthday wishes came from all over as Kareena Kapoor, Saif Ali Khan and Amitabh Bachchan’s AVs were shown on the sets.

If this was not it, for the first time ever, the entire Devgan family made their appearance on screen and also present were the cast of ‘U Me Aur Hum’, Sumit Raghavan and Divya Dutta.

Lastly, talking about the birthday bash, Director Satish Datt says, “Ajay was immensely surprised as well as shocked on seeing the entire celebration. As we unfolded all the surprises in the form of AVs’, the star could not stop, but quiz us during breaks on what more is in store for him. He was very happy that we got in touch with his friend too. At the end of it, he really enjoyed and that is what we all wanted”.

14 years ago Arr Happyy Birthday Ajay!! Kajol is very lucky to have a hubby like u!
Cant wait till your movie- you, me aur hum comes out!!
x x


Thaks for the article...