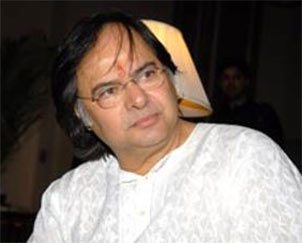 Filmmaker Muzaffar Ali, who worked with late actor Farooq Shaikh in three movies, knew him since their days in the aviation industry and they both had a mutual passion for cinema since then.

"I knew Farooque from the time when we worked for Air India. He was a flight purser and I was part of the ground staff. We shared a mutual passion for cinema which at that time we never knew we would be able to put into practice," said Ali, who was shocked to see the actor's life come to an abrupt end Friday night in Dubai following a cardiac arrest.

"'Gaman' was his first break as a leading man. Before that he had done a role in M.S. Sathyu's 'Garam Hawa'. I saw him and I cast him immediately. I knew he had the quality of innocence and vulnerability that I needed in 'Gaman'," said Ali, who thought Farooque was pitch-perfect as the migrant from a village in Uttar Pradesh earning a living in Mumbai by driving a taxi.

Ali said Farooque possessed that quality of unalloyed honesty and transparency that made him look completely credible on screen.

"In 'Umrao Jaan' I cast him as a Nawab. Though the role was culturally far removed from 'Gaman', I still needed that quality of vulnerability which Farooque again projected in 'Umrao Jaan'. In my 'Anjuman' too he played an innocent man free of artifice and the manipulative spirit. He was like that in person as well," he said.

Was he trapped in playing goody goody roles? The director says he wouldn't know.

"I could only see him within the parameters of the characters that he played for me. We had a wonderful time working on all three films. All the three films were shot in and around Lucknow. So, I think the credit for introducing Lucknow to Farooque goes to me," he said.

Aishwarya Sharma shared a loved up photo with Neil Bhatt from the sets ...