Mumbai, Jan 2 (IANS) Anurag Basu, who is directing Hrithik Roshan in an action-romance, wants a brand new leading lady opposite the star.

Hrithik will be paired with a completely new girl, his first woman debutante since his debut in 'Kaho Naa... Pyar Hai' five years ago.

'The theme is such that we need a fresh girl. We're searching for her. If we don't find the perfect debutante, only then we may consider an established face,' Basu, 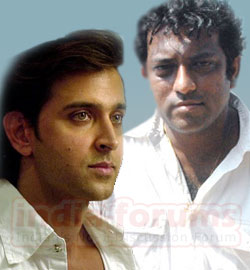 Featured Video
who will present Hrithik in a never-before avatar in the movie produced by the actor's father, told IANS.

Basu earlier discovered Kangana Ranaut for 'Gangster - A Love Story', which was a turning point in his career.

'Yes,' laughed Basu. 'But every day isn't a Sunday. And we may not get that lucky this time. However, I'm extremely happy to be working with Hrithik who apparently saw 'Metro' and liked it.

'Hrithik and his father are non-interfering people. An added bonus for doing this yet-untitled film is that Hrithik's uncle Rajesh Roshan is setting the score. I've always been his big fan.'

The director did not have any release after 'Life... In A Metro' and feels it is time to wield the megaphone again.

'I need to get back behind the camera. It has been quite a while since 'Life... In A Metro' was released. I am glad it worked. But now, I need to move on,' said Basu, who plans to take the Hrithik-starrer on floors in mid-2008.

While he waits to start his film with Hrithik, Basu is scripting a film that he has committed to UTV.

For now, his plans for a sequel to 'Metro' have been put on the back burner.

'I'll do the sequel only when the script is better than the first part. Otherwise, there's no point in doing a sequel for any film,' said the filmmaker, who has survived a terminal illness and is now doing 'the best work of his life'.