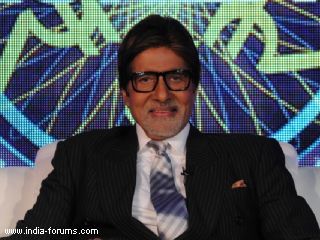 Meeting small-town India on Kaun Banega Crorepati 5 (KBC), the hugely popular game show, has left him with a sense of inadequacy - of not being able to do enough for people - but it has also been exceptionally rewarding, says Amitabh Bachchan, who confirms that he will host the sixth season of the TV programme as well.

'I feel we are so unaware of what the 'real India' is all about,' Bachchan admits.

The 69-year-old iconic Indian actor, whose feet most KBC participants touched reverentially, is taking a break from work right now. He revealed in an e-mail interview with IANS that the Nov 16 birth of his granddaughter - the child of son Abhishek and daughter-in-law Aishwarya - has caused everyone in the Bachchan household to adjust their time around 'the little one'.

How has the interaction with the small town on 'Kaun Banega Crorepati (KBC) 5' affected you as a person and as a star?

I do not differentiate between a 'person' and your mention of 'star'. To me they are both the same and equal and that really sums up my interaction with those who come on the KBC Hot Seat in front of me. I like to treat them like I would a guest in my house.

I am pained to learn the plight of those that come from small towns, the conditions they live in and their extreme circumstances. It has been very moving emotionally to hear their stories and there's a feeling of great inadequacy for being unable to do something for them.

We keep contributing and supporting many causes, but surely the extent of their requirement is much, much greater than what we can possibly do. One feels so helpless in their company, but seeing their drive, confidence and will to do better is motivational not just for me as an anchor but, I am certain, as a viewer of KBC as well.

I feel we are so unaware of what the 'real India' is all about. Yes, we read about them through the media...but meeting them personally, talking to them, being a part of their emotions and thinking has been most revealing and at times most rewarding. Rewarding, because we learn so much from their spirit, their beliefs and their sense of morals.

KBC is about knowledge and it's different from movies and ads; so did you find it an intellectually stimulating experience?

Yes, indeed! Knowledge learnt from KBC is also of great benefit. But to say that movies and ads are bereft of such knowledge is also not entirely correct. Each has a beginning, a middle and an end. They have a story to tell, drama, suspense, excitement, exhilaration and celebration, despair...In many ways both the entities are somewhat similar. 'Aarakshan', my last film, was a great educator for me in the chapters of reservation and caste politics. Many other similar films also touch upon subjects that are intellectually stimulating.

Will there be a KBC 6? If yes, what do you think should be the focus next time?

Yes, I am contracted to do another season, which should begin by July-August 2012 and, no, I am not aware of what and where the focus will be for the show. That the creative team at Sony decides.

Apart from KBC, would you consider any other TV project?

You have signed Ashutosh Gowariker's film. Share something about your role.

Yes, I have accepted Gowarikar's next film and I play a detective in that, but that is as much as I can reveal about the film at this stage. It is expected to be on the floors by the middle of next year.

You have played a role in Australian filmmaker Baz Luhrmann's 'The Great Gatsby', your first international project. How was the experience?

Baz Luhrmann and 'Gatsby' is more a friendly gesture for a minute cameo of just one scene in the film. But the experience of working in an international project with such luminaries as Leonardo Di Caprio and Toby Maguire has been fantastic. The amount of effort put in detail and the time spent in getting every possible angle correct in the most professional manner has been extraordinary. My work has been wrapped up.

There are no offers at the moment, but were they to come, I would consider them.

How has the ambience in the house changed after the granddaughter came home? What would you like to call her, if not formally, then at home?

The ambience at home is one that would reflect the entrance of a new member in the family in any other home. There is excitement and happiness all around and our time is now adjusted to the little one and her habits. We do not have a name yet, but shall soon. Informally, she is the 'little one'.

pallavi25 10 years ago Hes a fantastic actor! Madhur and Neil will make Jail worth watching!
Did he get his grandpa's singing genes too?

cookie09 11 years ago great .. he has nice voice.. he just sang few lines in newyork and that was also so good..

magicalmelody 11 years ago so old news..
bt looking forward to watch the movie..