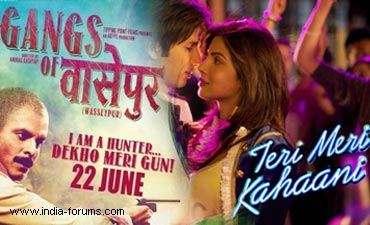 It's romance versus crime at the box office this weekend with out and out romantic drama "Teri Meri Kahaani" and reality-based crime thriller "Gangs Of Wasseypur" hitting the screens Friday.

Kunal Kohli's "Teri Meri Kahaani" will see hit 'jodi' of "Kaminey" - Shahid Kapoor-Priyanka Chopra - serenading on the screen in three avatars in three different time zones. Anurag Kashyap directed "Gangs Of Wasseypur", however, is all about gore and violence and it will focus on war between two gangs and the coal mafia in Wasseypur, Jharkhand.

Kohli loves pure romances and is ready to woo his fans with "Teri Meri...", which will take them through a journey of eternal romance between a couple who have vowed to love each other not only in one life, but in every life to follow. Their love is so strong that even destiny wants to bring them together.

The story starts in 1960 in Bombay with Govind (Shahid) and Ruksar (Priyanka), then moves ahead to the present Britain and shows Radha-Krish's relationship, and again goes back to 1910 Punjab to tell Aradhana and Javed's love story.

Will true love prevail or will destiny take its course? Watch the film to know the answer.

Made at a budget of around Rs.30 crore, the film has been shot in places like Maharashtra, Britain and Bihar.

Set of the film has been designed by Muneesh Sappel, while composer duo Sajid-Wajid has given music for "Teri Meri Kahaani", which will also see Prachi Desai in a special appearance.

On the other hand, Kashyap shot more than 90 percent of "Gangs of Wasseypur" in Uttar Pradesh to bring the right mood and feel to the story. Its cast doesn't boast of big stars, rather it has actors like Jaideep Ahlawat, Manoj Bajpayee, Nawazuddin Siddiqui and Richa Chadda.

The story starts from the end of colonial India, when Shahid Khan loots the British trains, impersonating as Sultana Daku. Now outcast, Shahid becomes a worker at Ramadhir Singh's (Tigmanshu Dhulia) colliery, only to spur a revenge battle that passes on to generations.

At the turn of the decade, Shahid's son, Sardar Khan (Manoj Bajpayee) vows to get his father's honour back, becoming the most feared man of Wasseypur.

Staying true to its real life influences, the film explores this revenge saga through the socio-political dynamic in Wasseypur, Jharkhand, also known for coal and scrap trade mafia.

A two-part series, the film was screened at the 65th Cannes International Film Festival and received critical acclaim.

With both the films completely different from each other in terms of story and treatment, it would be interesting to see how viewers react to them.