Mumbai, Feb 5 (IANS) Director Shojeet Sircar, who is shooting a marital drama with Amitabh Bachchan and Sarika, has a problem: he needs two actors to play the younger version of the protagonists. 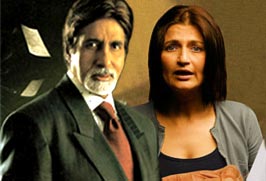 The problem is who can match the two actors physically and in terms of talent?

How about Abhishek Bachchan and Sarika's daughter Shruti, who is all set to make her debut as an actress?

'I did ask Abhishek to do the role, but he didn't feel the time was right to fit into his father's shoes,' Sircar told IANS.

'Even as I shoot with Amitabh Bachchan, we're auditioning young men who have his looks and at least some acting talent. For Sarika, we've more or less found a young actress to play her younger self,' he added.

Apparently, when Renzil d'Silva of 'Rang De Basanti' wrote the screenplay, he had envisaged Abhishek as the Big B's junior avatar.