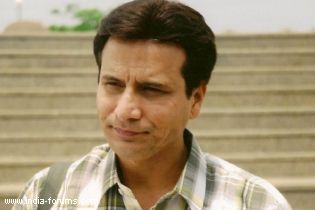 Actor Sandeep Kulkarni, who has starred in Hindi films like "Hazaaron Kwhaishein Aisi" and "Traffic Signal", is making his debut as a movie producer with upcoming socio-psychological thriller "Dombivli Return".

He says the idea is to be able to make films he himself believes in.

Sandeep, who has been acting in Hindi and Marathi films for almost 15 years, says he was an active behind-the-scenes part of movies like "Shwaas" and "Dombivli Fast" and so eventually decided to turn producer.

"I thought I should be able to make the subjects I believe in. Therefore, when 'Dombivli Return' got written, I thought of becoming a co-producer because only then could I make the film the way I wanted to," Kulkarni told IANS in an email interview from Mumbai.

An actor from theatre, television, and films, he will also be seen on screen in "Dombivli Return", playing a photographer working in the public relations department of the Mantralaya, the administrative headquarters of the state government of Maharashtra.

Further talking about the role, he said: "Complacent in his life with his family, a point comes across as an opportunity which changes his entire life. The story unfolds as to how he takes that trip and the roller-coaster journey that he gets into."

Sandeep's work is popular among Hindi and Marathi audiences.

Handling two worlds as a producer and actor wasn't an easy experience for Sandeep.

"This film also required a good ensemble cast making it quiet hectic to shoot and to complete it in a scheduled time," he said.

"Dombivli Return" has actress Rajeshwari Sachdev opposite Sandeep, as well as actors like Amol Parashar and Hrishikesh Joshi.

"They are all brilliant actors and have helped take the film to another level. I have worked with all of them for the first time. They have all put their heart into this film. And I will always look forward to working with them in future," said Sandeep.

The movie also marks the directorial debut of Mahendra Teredesai and, as a co-producer, Sandeep is confident he's done a good job.

"As a producer, I padded up with the best technicians around him. He had written a brilliant script and insisted on directing this film himself. I personally think the movie has rolled out well and hope the audience will appreciate it too," he said.

Sandeep guarantees that "Dombivli Return" will be a "roller-coaster" experience for the audience.

"This film will be liked and appreciated by both national and international audiences due to its wide identification," he said, adding that the movie will have an audience larger than his former Marathi film "Dombivli Fast".

"I'm quiet excited to see how people will respond to this film. The making had demanded a lot of time and hard work and I am hoping for a positive audience reaction to make it all worth it," said the actor-producer.