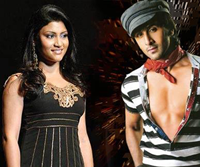 Featured Video
Productions and UTV Motion Pictures today announced that they are all set to release its film Wake Up Sid on 2nd Oct, 2009.


Wake Up Sid is being directed by Ayaan Mukerji and stars Ranbir Kapoor and Konkona Sen Sharma.


The music of the film has been composed by the celebrated trio Shankar-Ehsaan-Loy.


Wake Up Sid is a Dharma Productions movie produced by Karan Johar and distributed worldwide by UTV Motion Pictures.