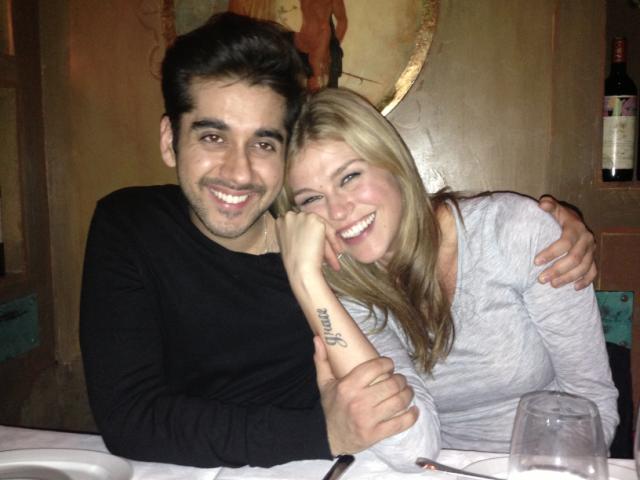 Young actor Vinay Virmani, who stars alongside Adrianne Palicki, the female lead of "G.I. Joe Retaliation", in a quirky comedy titled "Dr. Cabbie", says their chemistry will be something to wait and watch out for.

Vinay is currently in Toronto and is waiting to shoot with Palicki.

Apparently, the duo has many sizzling sequences together in the film, but Vinay is tight-lipped about it.

"You'll have to wait to see what kind of a chemistry I share with Adrianne in 'Dr. Cabbie'. She is one helluva beautiful girl, and I can't wait to begin my first schedule with her in Toronto later this month," he said.

"We had absolutely no problem shooting in Chandni Chowk. My director Jean-Francois Pouliot, Lilette Dubey (who plays my mother) and I shot with a huge team from Canada in the thick of Chandni Chowk. And we had no problems whatsoever," he said of his experience.

Vinay says the film, which he has co-written, raises vital issues regarding Indians who work abroad.

"Countless Indians who leave their country find it hard to get jobs when their academic qualifications are disregarded abroad. I play one such character who is a qualified medical doctor from Delhi.

"But when he arrives in Toronto he discovers his medical degrees are invalid. So he becomes a taxi driver and starts a mobile doctor's clinic in his cab," he said.

Vinay co-wrote the film based on his own experiences.

When one asks where the lovely Palicki fits in, Vinay said: "That's where the plot gets provocative. All I can say is, Adrianne has a very important role to perform."

Vinay looks back on his role in Bejoy Nambiar's "David" with much fondness.

"I wish the film had worked better. I am very proud of 'David'. I couldn't have hoped for a better launch. Anytime that Bejoy asks me to do another film, I will run and do it."