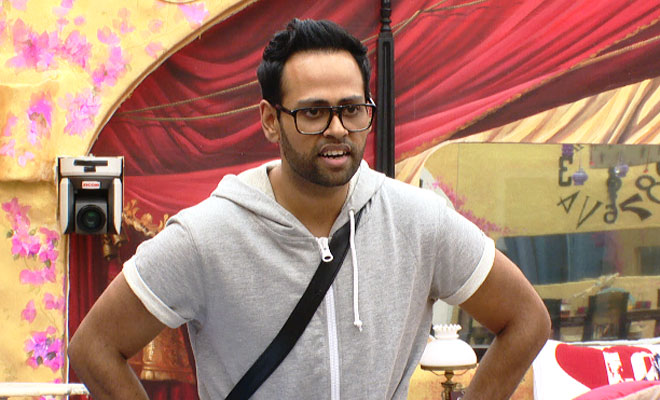 Former video jockey Andy, who was evicted mid-week from reality show 'Bigg Boss Saath 7' just days before its impending finale, found few but good friends during his stint and one of them is wrestler Sangram Singh, whom he describes as his 'teddy bear'.

"I'd like to think of everyone in there as friends. Yes, there were cowardly double-standards and mistakes were made. But at the end of the day, we are all human. And I'd like to only focus on the good things that happened in there," Andy said.

He made friends with actress Shilpa Saklani and Tanisha Mukherjee, but says: "Sangram Singh was my teddy bear."

"We slept together. But let's get this straight - ha ha - we shared a bed as brothers," he added in his quick-witted style.

Andy's eviction came as a surprise to viewers who thought he had the potential to be a winner. But he wasn't disappointed.

"Think of it this way. I actually went up to being among the five finalists, which is quite an achievement for me. I didn't think I could survive in there for so long. The first six weeks were great fun. There was laughing and joking, fun and banter...Then the bullying started."

"Suddenly I was the victim of a lot of ganging-up and bullying. I just couldn't take it," added the 33-year-old.

His predicament was eased out, thanks to a psychiatrist.

"After a point, I just wanted to leave. But 'Bigg Boss' got me to speak to someone. And that calmed me down. I was able to sleep peacefully," said Andy, who believes he has "come away a better cook than ever before".

Andy has only words of gratitude for host Salman Khan.

"I'd looked forward to every on Saturday when he spoke to me. It was my reality check in a bizarre unnatural situation. He was very kind to me. And he would admonish those bullies in there who went belligerently after me," he added.

'Bigg Boss Saath 7' started on September 15 with 14 celebrities from various walks of life.

The final four contestants of the show now are Gauhar Khan, Ajaz Khan, Sangram and Tanisha. The grand finale will air Saturday.

Mayu.jolly 6 years ago All the best for future Andy..
You were indeed a very good contestant...
Loved you n Asif as bb contestants!!!!

You were the best contestant in BB7 house

-Ms.Muffin- 6 years ago Onething really loved abt BB was the friendship between Andy and Sangram which was genuine

Kangana Opens Up on Instances of 'Big Heroes' Sexually ...
43 minutes ago

"She Has To Send Me a Complaint After Which I Will Look Into ...
56 minutes ago