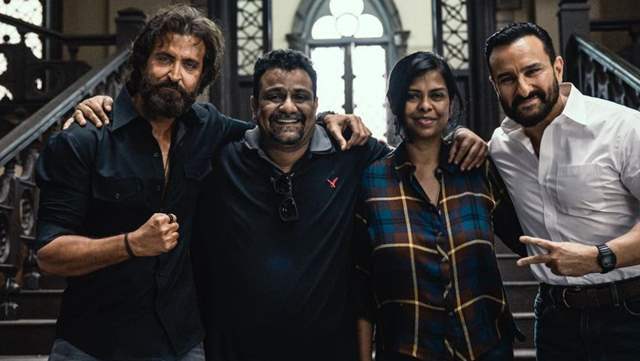 Hrithik Roshan is an avid social media user and often keeps his fans updated on his professional and personal front. The actor created waves right after he was roped in the Bollywood remake of Tamil neo-noir action thriller Vikram Vedha.

Vikram Vedha stars Hrithik as Vedha, while Saif Ali Khan will be seen playing the role of Vikram.

The Krissh actor since then has been dropping exciting glimpses of his character Vedha on social media. Today, the actor took to his social media handle and posted a long note for his journey of Vikram Vedha.

Hrithik Roshan took to Instagram to post photos from the sets, where he was seen standing with directors Gayatri and Pushkar. Saif Ali Khan was also seen posing with the trio in the photo. The War actor complimented about the crew in the post, saying that he wouldn't have been able to play Vedha without the presence of Saif as Vikram.

“For me, this journey has been as frightful and as delightful as a skydive. Using Vedha as an opportunity of letting go, aligning with what is, finding joy in being less than, and being wrong, has felt refreshingly new for me. It’s been a journey of remoulding, rewiring and trusting. Time and my audience will tell if my instincts were in the right place or not."

“As we called it a wrap on set, my mind is flooded with all the happy memories, testing times, action, thrill and hard work we all have put into Vikram Vedha. Doing a little excited-nervous dance in my head today.. As we inch closer to our release date.”

Read the full note below.

To note, Vikram Vedha will mark Hrithik’s first collaboration with Saif and the makers had unveiled their respective first look earlier this year which received a massive appreciation from the audience. Vikram Vedha will be hitting the screens on September 30 this year.

+ 14
1 months ago They did NTJNH also together! Waise finally now HR will get rid of the beard. its too unkept and doesn’t suit him much!

+ 14
1 months ago They did NTJNH also together! Waise finally now HR will get rid of the beard. its too unkept and doesn’t suit him much.