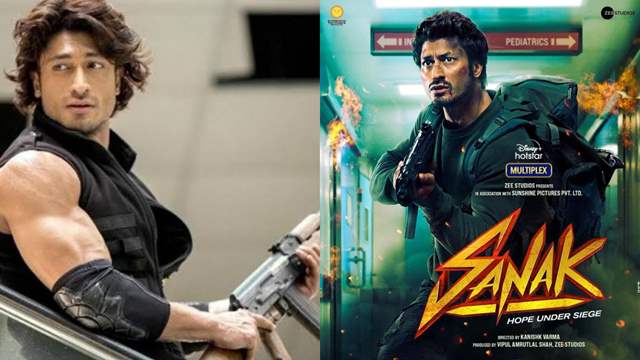 Vipul Shah and Zee Studios much-awaited film, 'Sanak - Hope Under Siege' has joined the list of big-ticket Bollywood movies to release on one of India's biggest premium OTT platforms.

This time in association with Zee Studios, Sanak - Hope Under Siege is all set to unfold the emotional journey with action packed sequences.

Apart from the film Vidyut Jamwal, Chandan Roy Sanyal and Neha Dhupia are also said to have important roles.

This is Vidyut's fourth film to be released directly on OTT.

While Vidyut is playing the central character in the film, he is teaming up with successful producer Vipul Shah for the fifth time in his career.

Earlier, both have made successful franchises like 'Commando'. Famous Bengali actress Rukmini Maitra is making her debut in Hindi cinema with the film 'Sanak-Hope Under Siege'.

The intriguing poster of 'Sanak' has got the audience really curious as they look forward to the thrills and twists that follow.

The release date of the film will be announced soon.Along with the announcement, the makers have also launched an interesting new poster in which Vidyut is seen holding a gun in his hands and ready for the mission.

After the second wave of Corona, a lot of things have changed regarding Hindi films and its business.

After the country's biggest entertainment brand like Akshay Kumar's film 'Bellbottom' did not do the expected business at the box office and stars like Amitabh Bachchan and Kangana Ranaut's 'Chehre' and 'Thalaivi' flopped in the first weekend itself. Producers of films are in a bind.

This is said to be the reason why Vipul Shah's film Sanak has also joined the list of Hindi films to be released on the OTT platform.

Disney+ Hotstar (formerly Hotstar) one of India's largest premium streaming platforms has changed the way Indians entertain with their favorite series and movies.