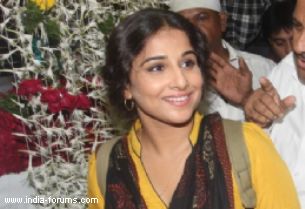 The film has been majorly shot in Hyderabad, where Vidya had a scene inside the dargha. Vidya was keen on visiting Mahim dargah. So, she took out time Thursday and went there, said a statement.

She was clad in "Bobby Jasoos" avatar with her detective bag too.

The detective comedy revolves around a female character. While Vidya plays the female lead, Ali Fazal plays the male lead. The film is directed by Samar Shaikh and is co-produced by actress Dia Mirza and her beau Sahil Sangha.

The film will hit theatres July 4.