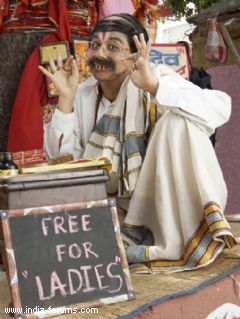 The various disguises carried out by Vidya Balan have created curiosity while the unusual pairing between Vidya Balan and Ali Fazal has sparked an interest.

The film's promos have created a huge buzz and the producers have received an overwhelming response.

With Vidya Balan's Bobby Jasoos, just a brink away from hitting the screens, the producers, Dia Mirza and Sahil Sangha have been flooded with requests for a special screening of the film.

Bobby Jasoos will mark Vidya's return after The Dirty Picture and Kahaani and the directorial debut of Samar Shaikh.

The producers have been inundated with requests from all quarters have been putting together a guest list for the screenings and it seems to be a never ending task.

The film's clever promotion has hooked people from the film industry as well as fans and audiences.