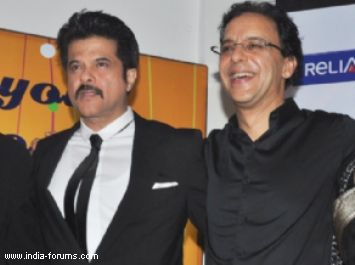 Vidhu Vinod Chopra has given Bollywood several iconic films like "Parinda", "Munnabhai M.B.B.S" and "3 Idiots", but the audiences have not seen his best yet, says his friend and actor Anil Kapoor.

"I think his (Chopra's) best is yet to come. I still feel that as per his dedication, sincerity and the kind of vision he has, he has not yet not made his best film till now," Anil told reporters here.

Chopra has completed three decades in the Hindi film industry and has organised a six-day retrospective of his films in association with a cinema chain.

The first film, showcased Thursday, was the 1989 release "Parinda".

Anil says he has strong memories connected to the film, about Mumbai's underworld gangsters.

"I remember when he came to me to narrate the film, he told me that he had only Rs.17 and he had no money to make the film, but he wanted to make 'Parinda'. So, that's the way the journey started," said Anil.

Chopra has been connected to several iconic films as director, writer or producer. Some of his films include "Munna Bhai M.B.B.S.", "Parineeta", "Lage Raho Munna Bhai", "Mission Kashmir" and "Eklavya: The Royal Guard".

Chopra is also gearing up for the release of his next production, "Ferrari Ki Sawari", starring Sharman Joshi and Boman Irani.