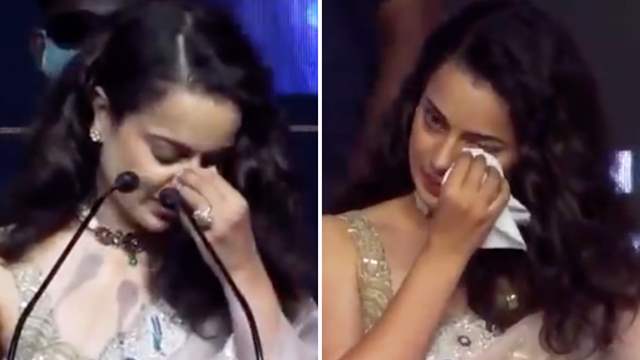 It’s double celebration for actress Kangana Ranaut as she celebrates her 34th birthday today and on this special day, she also launched the trailer of her much awaited film, Thalaivi.

On Tuesday, Kangana arrived at the trailer launch event of her film with director Vijay and rest of the team in Mumbai. While addressing the media, the actress had an emotional moment as she talked about Thalaivi director Vijay.

Never in my life have a met a man who has not made be feel apologetic about my talent.

She cries uncontrollably and says that she is not usually emotional but wants to express her gratitude to the director who supported her talent.

Vijay is one person who has made me feel good about my talent. Usually the kind of camaraderie people show with the male hero, they never show with the actress but as a director, I’ve learnt from him how to treat actors and how to show creative partnership.

A fan shared the video from the event on social media. Kangana reacted to the same as she retweeted it and wrote, “I call myself Babbar Sherni cause I never cry I never give anyone the privilege of making me cry, don’t remember when I cried last but today I cried and cried and cried and it feels so good #ThalaiviTrailer”