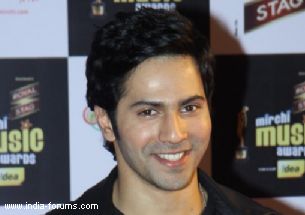 In his second film itself, young actor Varun Dhawan has scored his first lip lock. He will be seen kissing actress Ileana D'cruz in the forthcoming film "Main Tera Hero".

In the movie, directed by his father David Dhawan, "Student of the Year" actor Varun has worked up a great chemistry with his two leading ladies - Ileana and Nargis Fakhri.

Varun along with Ileana is set to get the temperatures soaring with his first onscreen kiss in the masala entertainer, said a source.

Produced by Balaji Motion Pictures, the movie is releasing April 4.