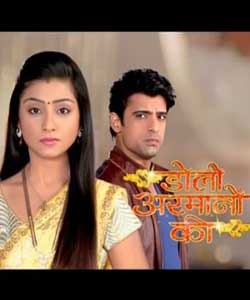 Spellbound Productions' popular show Doli Armaanon Ki on Zee TV is gearing up with an interesting track ahead which will ultimately boost the confidence of women. Yes, Urmi will speak up and puts Samrat behind bars.

As seen till now Urmi (Neha Marda ) is literally harassed and torchered by her own husband. Samrat ( Mohit Malik) has crossed all the limits and Urmi will now no more be a victim and bear the brunt.

Earlier we reported that in an unconscious state Samrat whips Urmi with a belt in such a bad way that she gets marks on her body. In a fit of rage Samrat lashes out at her and assaults her leaving her wounded.

Now in the upcoming episodes you will see Urmi striking back, she will no more be that bechari bahu of television. This motivation to fight back for her rights will be given Tauji played by Anupam Shyam Ojha in the show. Tauji has always stood like a pillar for her and will again stand with her for the justice. After testing Urmi's patience, she will emerge as a warrior in the upcoming episodes.

As per our sources, "Urmi will lodge a complain about domestic violence against her husband Samrat. Samrat will sit for a conference when the police comes and drags him out of his office and locks up in the police station."

Will this bring a change in Samrat's behavior? Will Samrat turn to a good husband after this incident?

samrudhi.r 6 years ago jail might not change his character, but it will definitely make him sit up and look at urmi in a different light. he will be more cautious about what he does and how he does from next time onwards.

.giggles. 6 years ago Good he will go to jail. I personally feel he should be punished more than just jail as what he did was terrible.

mcm99 6 years ago Being a journalist is a responsible job. The English used in the above text is horrible. There is no word called torchered. Its tortured. The least you guys can do is use a spell check. Also Samrat was not in an unconscious state, he was in a drunken state.
Please be more careful when reporting and spend some effort learning the language.

rutu83 6 years ago it's sad that urmi by herself wouldn't have done this. i'm glad tauji is there but why can she not stand up for herself? and after all is said and done, she's going to accept him back :sigh:

zoha11 6 years ago Awesome ab aayega maza..she has to torcher him the way he did nd then he wud change nd then naak ragdo infront of urmi

luvbbat 6 years ago I don't think Samrat will change after getting locked up in prison - a change will only happen gradually..

As far as Urmi is concerned- I am really happy that she will finally start taking charge of her life. I hope she teaches Shashi a lesson too.

yet just putting him behind bars is not enough.. he should get a severe punishment