Upasana Singh, famous for her Abba Dabba Jabba role in the movie Judaai, who was last seen in SAB TV's Mrs. and Mr. Sharma Allahabad Waale will now be seen essaying a vital role in Sahara One's Ek Chukti Aasman. 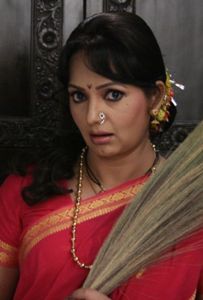 A source says, "Upasana Singh will soon enter Ek Chutki Aasman as Shantabai who is actually an owner of a chawl and helps the needy to get their daily bread. She has a very vibrant personality and is very dominant when it comes to chawl members. But on other hand there is a soft heart hidden inside that makes her help Chutki who is all alone in the chawl with two friends."

"Shantabai is dominating but in fact is a very emotional person. Upasana has shot for the initial entry episodes and will shoot regularly for the remaining episodes within couple of days," adds source.

We contacted Upasna and she confirmed the news, "Yes, I have shot for the show and my entry will telecast within these two days."

Talking about her character she says, "I am essaying a very interesting character which is again very close to children. Even earlier, I have played roles along wih kids in Son Pari and My Friend Ganesha. I hope this character too gets that fame which my other character like Gangu bai got."

"Being a kids centric drama, I think the role in Ek Chutki Aasman will surely appeal to kids once again," signs off Upasana.

Hope Shantabai too gets her share from the kids!

bubble_14 8 years ago Emraan your truly an underrated actor , but you will always have your fans I LOVE YOU!

kelly12 11 years ago just watched it omggggggggggggg...the movie is the BEST...emran is awesome

Most of his movies tend to do well, and so I think it''s safe to conclude that the guy definitely has one heck of a fanbase!

Hopefully he''ll keep on taking up only the best of roles, and avoid too much of the extra-marital-affair centric roles.

I wish him all the very best for the future!

brainychild92 11 years ago smal??boy u have a big fanbase okay!im included in it!! emran is the best!!!!!!!! i dont wanna watch the movie cuz of the real life couple i wanna watch it for u, emran and inshallah i will!!

wackysharu 11 years ago raaz 2 rock.... emraan an kangna n even adhayan is good in d movie...

Ranveer Singh Requests NCB to Join Deepika Padukone during ...
an hour ago

Kasautii Zindagii Kay 2 actor Akash Jagga: Not heard anyone ...
an hour ago

Sushant’s sister Shweta Singh Kriti shares a video of a fan ...
an hour ago

Saath Nibhana Saathiya 2: Devoleena Bhattacharjee and team ...
an hour ago