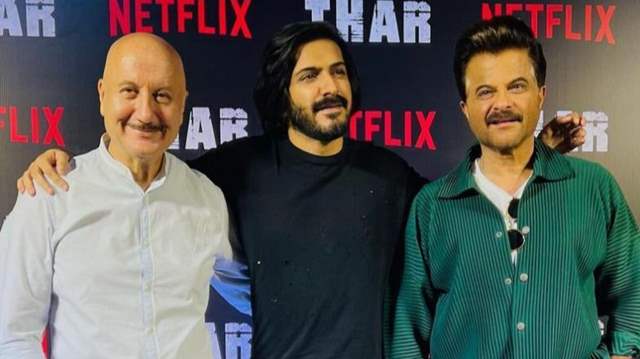 It is now streaming on Netflix. Anupam Kher, Sanjana Sanghi, Alaya F, Saiyami Kher, Abhimanyu Dassani, Shonali Bose, and others were among those who attended a special screening for their industry pals on Thursday in Mumbai.

Anupam Kher recently gave the film an honest review on social media and commended the Thar cast. The actor tweeted a couple of images from the occasion with the Mr. India actor and Harsh.

"Watched #Thar!! Excellent!! Very Unique presentation of an unconventional story. Beautifully shot. Intriguing! Very good performances by the whole cast. My friend and Veteran @satishkaushik2178 is superb. My other best friend @anilskapoor is mind blowing and wonderfully restrained! But it @harshvarrdhankapoor who is the heart of the film. Congratulations cast and crew!!"

The film is set in the 1980s and follows a man who comes to a major city in search of work and vengeance for his past.

Raj Singh Chaudhary directs Thar, which is produced by Anil Kapoor Film Company (AKFC) and Harsh Varrdhan Kapoor, who is making his debut as a producer. After the Netflix film AK versus AK, in which Harsh Varrdhan had a cameo role, released in 2020, this is the father-son duo's second collaboration.