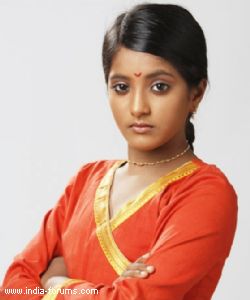 According to our source, "Ulka will essay Rakhma, a girl who gets married at an early age and stays in a nearby village with her husband (Vishal Thakkar). The track continues with Rakhma getting exploited by few Mughuls at the village. This provokes Rakhma to revolt against the Mughuls. Eventually, the news of this revolt of a common villager women against a huge Mughul gang reaches Shivaji. His curiosity to meet this brave lady leads him to the village. This incident would probably be a bridge, building to the leap."

We contacted Ulka Gupta and her father confirmed the news, "Yes, Ulka will be seen in a cameo role in Veer Shivaji. It's an interesting character, somewhat similar to her character of Manu in Jhansi .  Actually, she is giving her board exams but the reason to accept the role is that we cant say no to Abhimanyu. It's just three days of shoot and she can manage both. After her exams she will be taking up a good role if it comes along."

Get ready to see Ulka back in yet another brave avatar!

anu93 8 years ago Great News!! It was pleasant surprise to see Ulka back in brave avatar

rpuran 8 years ago somehow i feel they shouldnt make kids act.. the show world takes the childhood away from kids... wish kids could remain kids..

dazzlingflora 8 years ago all the best for your exam... And for your role too

Patrarekha 8 years ago wow wow my sweet manu is back..can't wait to see her again

littleflaws 8 years ago Awaiting your return our 'Rani'! Love you and All the best!

.TapasYa. 8 years ago come back beauty princess,i love you so much all the best dear

RadhapriyaG_01 8 years ago She will do just as well as she did in Jhansi ki Rani. Really looking forward to seeing her back. All the best Ulka!

Kangana Opens Up on Instances of 'Big Heroes' Sexually ...
3 hours ago