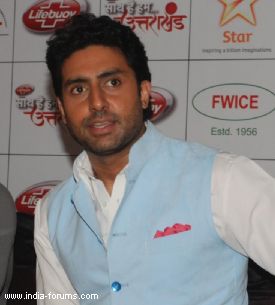 Actors Abhishek Bachchan and Uday Chopra have been part of the "Dhoom" franchise's journey from the time it took off in 2004. And Abhishek believes that other characters of the film may come and go unlike his and Uday's.

"Pardon the immodesty, but Uday Chopra and I are 'Dhoom'. The franchise chronicles the ongoing adventures of Jai and Ali, that's me and Uday. That's the format of the franchise. The other characters may come and go. But we go on forever. Like Batman and Robin. Can there be a 'Batman' franchise without Batman?" asked Abhishek.

Having said that, Abhishek looks back with much affection at the journey. "From 'Dhoom' to 'Dhoom 2' and now to 'Dhoom 3', it has been an amazing journey. To begin with, it was the story of the adventures of these three boys, me, Uday and John Abraham," he said.

"Our producer Aditya Chopra suggested we try to re-define the action genre in our cinema. We were all young, hopeful and enthusiastic, eager to try out this experiment. How were we to know it would turn out the way it did?" he added.

Now, the junior Bachchan feels the "Dhoom" franchise is watched for being what it is.

"Yes, there are stars in the film. 'Dhoom 2' had Hrithik Roshan and Aishwarya Rai . And now 'Dhoom 3' has Aamir Khan and Katrina Kaif. But I think the brand Dhoom is a much larger than starcast."

Abhishek feels the presence of a new director in the franchise brings all-new challenges to the table. The first two installments were directed by Sanjay Gadhvi.

"The other two 'Dhoom' films were not directed by Victor (Vijay Krishna Acharya). So, there is a new feel and flavour to the franchise that Uday and I could identify and feel since we are carryovers from the earlier life of the franchise," he said.

"Victor had a different vision. Fans of the 'Dhoom' series would be surprised by the changes in the franchise. Earlier the focus was on making a fun film. This is an edgier and darker 'Dhoom' than the first two," he added.

The 37-year-old has no leading lady in "Dhoom 3". But he does have Aamir. Abhishek can't stop raving about his formidable co-star.

"I must have been 11 when 'Qayamat Se Qayamat Tak' came out. It changed the way we look at love stories. The nation went crazy. We've loved and admired him for the kind of cinema he works in. Working with him was great learning experience," said the son of megastar Amitabh Bachchan.

Abhishek says "Dhoom 3" was physically demanding, but he enjoyed all the action.

"It was like giving fancy toys to a boy to play with. I got to ride around in motorbikes and to ride these sleek motor-boats through these narrow canals in Chicago," he said.

As for trade voices already predicting a Rs.200-crore run for "Dhoom 3', the "Paa" star opines nonchalantly: "These are expectations from within the industry. The audience doesn't care about how much money a film makes. Do you know the collections of your all-time favourite film 'Amar Prem'? Audiences go to a film. They like or dislike it. That's it."

He will be seen on the big screen after a year, but says it wasn't planned that way.

"It's not as if I planned it that way. After 'Bol Bachchan' in May 2012, my career panned out in such a way that there was no release until now. 'Dhoom 3' kept getting repeatedly delayed for whatever reasons."

"And unfortunately, for my fans and for Katrina's fans, there was no release in 2013. It wasn't planned that way. And I didn't miss myself on screen. I see myself every day in the mirror," he said.

Abhishek says he felt no career pangs about being away for a longish time.

"By the grace of God, I am not an insecure actor at all. And if you see the career-graph of others, no major actor does more than a couple of films per year. Aamir, for that matter, has not been in a film since 'Talaash' a year back. So...no! I don't feel insecure about not being on screen for some time," he said.