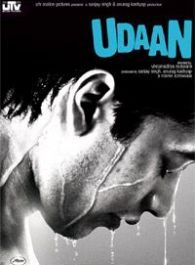 Udaan – Simple, Soulful
When guys attain their puberty, their voice box breaks over to give out the mannish deep sound that would identify them for the rest of their lives. Many times, for boys adulthood is all about breaking free, from your own inhibitions, from your parents caring or sometimes constricting clutch and from the conventional ways.

We all experience a rebel-streak in our teens or belatedly during early twenties. For boys, this is more pronounced, aggravated…yes one of those ingrained troubles mankind has to face generation after generation! Ha ha. But jokes apart, this phase is sort of like the friction amongst rocks before they all settle down smoothly. This is the phase that goes a long way in shaping us for what we become. And this is the phase that Udaan explores.

Nothing about Udaan is grand or extraordinary. This story of a severely dysfunctional family with a teenage boy tugging hard at the last remaining strings that hold the family in place is full of heart and soul. The unblemished performances of the actors take it to another level.

Rohan (Rajat Barmecha) is one of those rich kids who are packed off to hill station boarding schools only to meet their parents on vacations. Turns out his relationship with his father (Ronit Roy) is ice cold. Except for the dna strand in their bodies there is no similarity between the father and son. Rohan is expelled from school after a wild- time- out- with- boys' fiasco and returns home to live with father. He discovers he has a half- brother (Aayan Boradia). So this trio of men awkwardly try to live together with their personal bubbles never so much even skimming to the each other's.

But the dangerously abusive and military strict father's rash ways somehow bring the two brothers close. Rohan is pressed down against his wishes to go become an engineer while continuing with the gruelling apprenticeship at his father's factory. The journey and the steady but painful struggle of Rohan to break free from his fathers oppressiveness and towards realizing his dream of becoming a writer is captured beautifully in this lazy-paced film.

Udaan is peppered with some hilarious moments but at times the artiness catches up and you have a dragging moment. This is one of those movies which once you watch you sort of feel empowered …like maybe you can do anything you want if you put your heart into it! If the father shown in the film is anywhere close to yours you'll feel happy that there's some hope for you to get over it all. If you can't relate to this onscreen father at all, it will make you glad that you are so lucky!

The locations are not ornate but green and clean; bringing a freshness that's so typical of towns. The music is inspiring, perfect for the film.

The message is to give teens some leeway for their wrong actions. Lets say as a parent you know you had been into bad habits…still are…you know it has been running in your family ...like drinking maybe…then its better, when you discover your child has had his first pint, to teach him to drink responsibly and how not to go overboard with the fizzy enjoyment, rather than trying to completely abstain him from it!

Ronit Roy is scary…so the effect is well achieved by his character. Ram Kapoor as his younger brother with a completely opposite mind is endearing. Rajat Barmecha is a silent killer. Without words he says a thousand things and the boy is talented! Aayan Boradia oozes cuteness in every frame. He is so sweet!

Udaan is one of those films that reflect life and watching it may just give perspective on yours.

Karan Johar likely to be summoned by NCB over 2019 Party ...
3 minutes ago

Breaking
Breaking Erica Fernandes confirms shooting for a music video with ...
29 minutes ago

Deepika Padukone was the Admin of WhatsApp Group that ...
2 hours ago