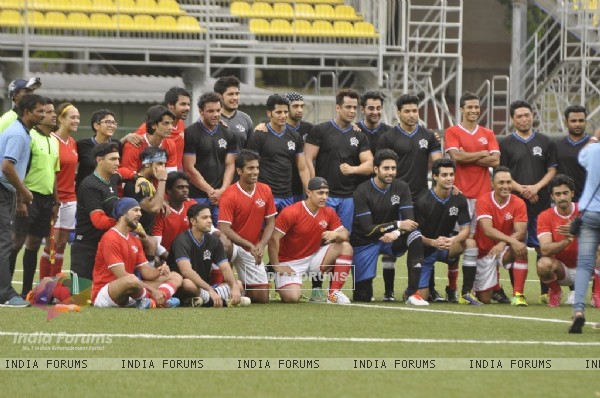 Playing a sport is good but playing it for a cause is better.

Recently our TV stars participated in an event hosted  by Ira Khan. A Football match was organized by Ira Khan daughter of superstar Aamir Khan and many known faces from TV also joined in for the cause. Well actors who actively participated in this match were Karanvir Bohra, Vatsal Sheth, Karan Wahi, Shabbir Ahluwalia, Karan Mehra, Gurmeet Choudhary and few more . The match was for a PIG foundation which is an NGO (Non Government Organization).

Charming Vatsal Sheth who is seen in Star Plus' show Ek Hasina Thi says, "It was fun and very refreshing to be a part of this great thing. We played for a PIG foundation which is an NGO and I think we have successfully achieved the result."

Popular actor Karan Mehra who is seen in Zee TV's show Pavitra Rishta says, "I am always happy to play Football and this time it was for a good cause so I was even more than happy.  I was in Abishek Bachchan's team and we lost it because all good players were in Aamir Khan Sir's team."

Handsome Shabbir Ahluwalia who is seen in Zee TV's show Kumkum Bhagya says, "We had an amazing experience and best part of it was the cause for which we played."

Well quite an interesting match!

NG.MAAN 6 years ago Gurmeet Choudhary its lovely 2 c u as a football player. U r d all-rounder totally. U rock in everything.

Asad4Zoya 6 years ago Kvb you are superb. Keep up the good work

AarYa.-.MaaNeet 6 years ago U are the best Gurmeet Choudhary. ...love u so much superstar.

Disaster_Queen 6 years ago Gurmeet Choudhary u are the best

jasraj123 6 years ago gurmeet chaudary you are amazing person who always do good things. love you jasraj123 6 years ago gurmeet love you so much. you always do take part in good things. keep it up

Naterguru 6 years ago U R AS SWEET AS U LOOK... GURMEET CHOUDHARY..