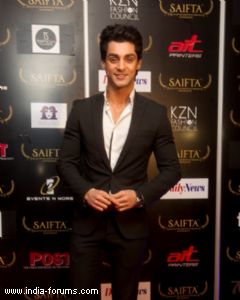 TV actor and host Karan Wahi is the latest to make a transit to the big screen and is shooting for his first film. However, he cannot reveal any details about the project.

"I am shooting for a film. But I can't talk about it. If I could tell you about the film, I would have," the 27-year-old said here during the shoot of the grand finale of dance reality show Nach Baliye season 6."

"The day I get permission to talk about it, I will invite you all and tell you everything about it," he added.

Karan has acted in TV shows like 'Remix', 'Dill Mill Gayye', and 'Kuch Toh Log Kahenge', among others.

Meanwhile, Karan is overwhelmed by the amount of love he sees on the sets of 'Nach Baliye' every year and says that the participating candidates, who are also real life couples, in the show can not fake on camera.

"Many people ask me if most of the couples are fake but genuinely I can never say yes. The amount of love I see on the sets is amazing. It is just impossible to show so much fake love. I fall sick seeing so much love. May be that's why I don't have any girlfriend," said Karan.

The actor has been the host of 'Nach Baliye' for two seasons besides hosting 'Nach Baliye - Shriman vs Shrimati'. He also hosted 'Indian Idol Junior' last year.

U r the besttt Karan Wahi. Loveee u rockstar

Awww.. I just LOVEEE you Karan Wahi . You're too good - All the best my cutie !!

wahian4life 7 years ago Alll the best for your movies Karan Wahi :D Love ya :)

7 years ago
love u Karan Wahi. u rockkk dude...