Actor Tusshar Kapoor is all set to make the audiences laugh their heart out with his upcoming comedy flick C Kkompany. His last release One Two Three must have proved to be a flop but the actor is confident that his new release will make it big at the box office. Letâ€™s see what Tushar has to say about his character in the film and many more.

Q. The tag line of C Kkompany says Jab Hane Wale Shasak Ban Jaye, why?
A. The three losers in this film Anupamji, Rajpal Yadav and I 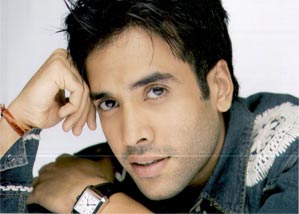 Featured Video
stay in the same flat so we are good friends also. We come from middle class family and we all have our own share of problems in our life. My biggest problem is that I am in love with a big gangster's sister (Raima Sen). Rajpal Yadav's problem, first of all is his short height and another is that he needs money in order to start his own business. Whereas Anupamji wants all his money back from his son which he had spent in his upbringing. In order to bring happiness in our lives we all make a plan which changes our life completely and we become heroes for every one.

Q. We have heard that your character named Akshay Kumar in this film resembles to Akshay Kumar's real life character?
A. Its not like that. One of the English newspapers has unnecessarily published a matter without proper research. In the beginning of the film Sanjay Dutt introduces all the characters through a song. And more over, I am playing a character of a crime reporter in this film so it can't be commented on him (Akshay). This character can be compared with those crime reporters who scare us every night coming in different news channels through various programs like Sansani and Wardat. Like them in this film I am also hosting a show on Zee news called Khalbali.

Q. You are first time doing this kind of a role, personally how much did you enjoyed?
A. There were only few scenes where I am acting like a crime reporter. But yes I had little problem while dubbing because Sachin asked me to do it in my own voice and in my own way.

Q. Do you think this type of shows should be seen?
A. (Laughs) Yes, if the TRP rate of the channels increases then it is ok. I am surprised to see that there are some reporters also who move around in search of this kind of news. One thing is good about it that we come to know about the crimes that are being taking place all over.

Q. You are working with Raima for the first time, is it true that she showed tantrums on the sets?
A. Of course not. She proved to be a very good co-star for me. She in fact became a part of our family.

Q. What was you reaction when you first heard that your character's name is Akshay Kumar?
A. I thought of only one thing that I say to my audience in the beginning of the film as, Naam se main to action hero lekin asal mein main ek reaction hero hu. I am a very coward person in this film for which Raima also keeps poking because she dreams that we make lots of money and run away to get married.

Q. It is heard that you and Ekta argued with each other for the designing of the film?
A. Yes, actually I liked some of the designs that were being made for the film and I did not liked some. But Ekta did not like any one of them. She was right also in her own way, but the way she rejected all the designs was not right. Later everything was sorted out.

Q. Ekta is very religious and what about you?
A. I am also religious but not like Ekta. Sometimes I also get angry with God. I say anything on his face but Ekta is not like that. She always remembers God even in her most difficult and bad times.

Q. How is Ekta as a producer and as a sister?
A. She is very good as a producer. She never interferes in any work on the set except doing her own work. She quietly observes all the proceedings and works on the set. She has also done a cameo in this film after I insisted her. As a sister I would like to say that she is very passionate about her work. She uses her heart more than her mind in work.

Q. Karan Johar and Mahesh Bhatt are also doing a cameo in this film?
A. Yes, they were required for the film so Sachin took them in this film. When the violence of C-Kkompany increases then Mahesh Bhatt handles everything like he handles other problems.

Q. Do you watch Ekta's shows?
A. No, actually other than television shows I enjoy watching movies a lot. Itâ€™s all right that she doesn't watch my films and I don't watch her shows. You can say it to be, tit for tat.