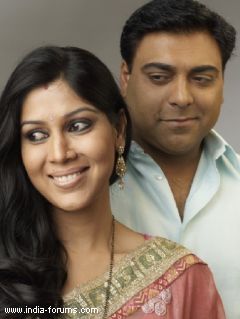 Sony Tv's Bade Acche Laggte Hai, has been creating waves lately with a proposed leap in the show.The news of 5 years has not gone down well either with the starcast or with the audience. Another question racing through everyone's mind is that who will stay and who will leave the show.

A lot of rumors doing the round are that Mohit Malhotra, Eva Grover, Chahatt Khanna are quitting the show. There have also been rumours that many actors are not happy with the leap and have made it amply clear to the production house that they will leave the show if the leap is happening. On the other hand actor Jai Kalra and actress Sumona Chakravarti have confirmed that they will continue to be a part of the show despite the variation in storyline.

Ayesha aka Chahatt Khanna who is rumoured to get married to Ram (Ram Kapoor) will turn negative in the show. She will try her best to keep Ram and Priya (Saakshi Tanwar) away from each other and create problems between them.

When Tellybuzz contacted Chahatt on this she told us –"I have no idea about this. We have still not got the proper story so I can't comment on that. We are hoping everything will sort out in 4-5 days time - actors are not happy with the leap but talks are still on. "

gurjotvirk 8 years ago Interesting track! Hopefully ayesha is changed she wont suit the negative role they neef some one a little older looking like roshini chopra

soumya85 8 years ago when nobody wants it then why Ekta why are u hell bent on ...serving us with one?
want RAYA together...don't split them coz of bimbo Ayesha...same old tricks cant u think anymore?
no more Ekta serials for me.

SriB 8 years ago the leap is not favoured by the actors too. pata nahi kya hoga.
but anyways Ram kapoor and Saakshi tanwar Rock

TVserialfreak 8 years ago Not only the actors, the viewers are also not happy with the leap...BALH was the only different show...but the CVs and EK have killed it in the name of bringing on the leap...if the leap does not have any negative moments or characters, then its fine otherwise it would be detrimental to the future of the show...its better that all actors leave the show so that there would not be any place for any nonsensical stuff...

saisamanvi 8 years ago thanks TB for the article...
love u raya...
balh rocksss

_CandyCream_ 8 years ago I'm gonna watch the show only coz of RaYa! They are amazing!!