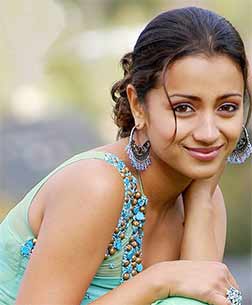 Southern actress Trisha Krishnan, who has predominantly worked in Telugu and Tamil films, is making her Kannada movie debut. She will be seen in yet-untitled Kannada remake of Telugu blockbuster "Dookudu".

"We have zeroed in on Trisha for the leading lady's role. I have seen her work and since she hasn't worked in Kannada film industry so far, I was even more interested to cast her. She instantly agreed to be a part of the film when I approached her," the film's director Madesh told IANS.

Mahesh Babu-starrer "Dookudu" catapulted the image of Samantha Ruth Prabhu, and Madesh hopes that the same happens for Trisha with the remake.

"I'm hoping that with this role, Trisha will find a strong foothold in Kannada industry as well. Our audiences are quite familiar with Trisha's work as most of her films from other languages have released here and have been appreciated," he said.

Trisha is paired with superstar Puneeth Rajkumar in the remake, which will also introduce composer S.S. Thaman, who composed the tunes for "Dookudu", to Kannada film industry.