Excitement has been rife in eager anticipation of the release of the trailer of Karan Johar's Ae Dil Hai Mushkil, especially after the teaser and the two tracks have driven audiences into a right frenzy. The movie stars Ranbir Kapoor, Anushka Sharma, and Aishwarya Rai Bachchan, and the intense chemistry between Kapoor and his leading ladies in the film is already the talk of the town. Shah Rukh Khan is rumored to be playing the character of Bachchan's husband in the movie, which seems to be a rather horribly kept secret. The movie also stars the Pakistani heartthrob and the extremely talented Fawad Khan in a special appearance, along with Deepti Naval, Lisa Haydon, and Imran Abbas in supporting roles.
Featured Video 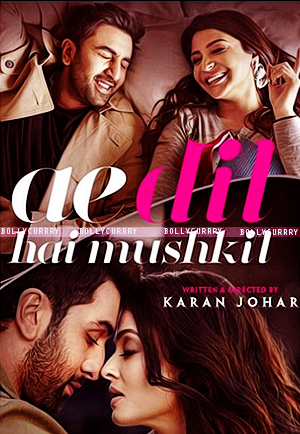 The trailer opens with what appears to be Ayan (Ranbir Kapoor) narrating a story of love and friendship, and it picks up from there. The audience is treated to beautiful shots of Ayan and Alizeh (Anushka Sharma) traversing around the city, followed by Alizeh telling Ayan how she doesn't want to lose his comforting friendship just because of passionate love. After being given a look into the genuine bond of love and friendship shared between the two, the audience is introduced to Ali (Fawad Khan), with whom Alizeh appears to share a tumultuous relationship. Enter Saba (Aishwarya Rai Bachchan), a rich and magnificently beautiful woman, who desires to become every man's desire, but not his need. This gives rise to a passionate relationship between Ayan and Saba, which is what leads to complications in the lives of the three protagonists.
After Student of the Year (2012), Karan Johar makes a comeback to writing and direction with Ae Dil Hai Mushkil. While we are thoroughly impressed with his direction, we're not sure about the writing, since there's not much one can make out about the story from both - the teaser or the trailer. However, one has to laud the editor, Manik Dawar, for his work on the trailer - the mystery surrounding the relationships and equations between the protagonists is definitely working infavor of the film!
After the success of Tamasha (2015), Kapoor returns to the silver screen with this film, and has performed ably. Bachchan looks every bit the unattainable woman that her character is supposed to be. It is, however, Sharma's performance that stands out the most in this trailer. Be it as Alizeh gallivanting around or crying in heartbreak, Sharma appears to have done complete justice to her role. Unfortunately though, there was very little of Khan in the trailer, which is a definite disappointment.
The music of this film has been composed by the famous Pritam Chakraborty, and has become an instant hit with the masses. There was a slight controversy surrounding the chartbuster "Bulleya", as many have claimed that it bears uncanny similarities to an English song, but nothing seems to have come out of it. Anil Mehta's cinematography is par excellence, as the viewers are treated to breathtaking shots of Paris and the opulent sets. A special mention has to go out to the team behind Bachchan and Sharma's looks in the movie - the women look unimaginably gorgeous, and are a visual treat for everyone watching the film.
Ae Dil Hai Mushkil releases on the 28th of October, along with Ajay Devgn's Shivaay - which means there are two big budgeted movies to look out for this holiday season.With the buzz surrounding Ae Dil Hai Mushkil, and all the positive publicity ithas garnered, only time will tell whether or not the film lives up to the hype. We wish Dharma Production and Fox Star Studios all the very best for thismovie, and hope that it leaves a mark in the minds of the audiences.
The trailer of Ae Dil Hai Mushkil is now streaming on YouTube, and we at BollyCurry urge you to watch the trailer and leave your views in the comments below.
Author: Ritchelle C.
Editors: Pooja B. and Gunia K.
Graphics: Aisha S.
Do you have a suggestion or comment for BollyCurry? Drop us a PM at BC_Dropbox today!