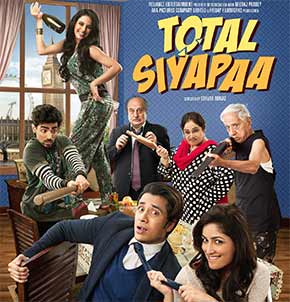 The screenplay of forthcoming Bollywood movie "Total Siyapaa" has been extended for a fictional romantic novel "The Sum of Two Wholes - Total Siyapaa".

Publishing house Harlequin India Monday announced the release of the novel, which is written by Neha Sharma.

The movie, starring Ali Zafar and Yaami Gautam, is penned by Neeraj Pandey and it will be released by Friday Filmworks, Reliance Entertainment and & Pictures.

Pandey, the film's writer, says "the plot of the book is different from the movie plot and it allows the reader to experience the story differently and understand the dreams, dilemmas and emotions of the characters."

The story is said to be a heart-warming romance between a fiery and confident Punjabi girl from India and a suave Punjabi guy from Pakistan.

From Edinburgh to London and onwards to Udaipur, friendship, love, family and geographical boundaries make their journey a mix of emotions and turbulence.

The novel builds on the movie's screenplay, its storyline is complementary to the content of the film and refreshingly different, offering something new to readers.

"'The Sum of Two Wholes - Total Siyapaa' is a delightful comedy, full of the chaos and comedy that ensues when opposites attract. It's an experiment in experiential entertainment that cuts across cinematic and book platforms," Amrita Chowdhury, country head, Harlequin India, said in a statement.

The film's actors are upbeat about the book.

Ali, who plays Aman in the movie, said: "As actors, we interpret the screenplay and emote characters to bring them alive on screen. This book has interpreted the pre-story of my character and made him into a flesh-and-blood thinking individual, who faces knockbacks with flair and determination, and ultimately wins - not just the girl, but also all that he strives for in life."

Yaami says the book offers more to her character Aasha than the movie.

"Everything I had imagined Aasha to be - her story before the movie begins, her wacky personal history, her laugh-out-loud friction with Aman when they first meet, her grit to prove herself, has been written in this book," she said.