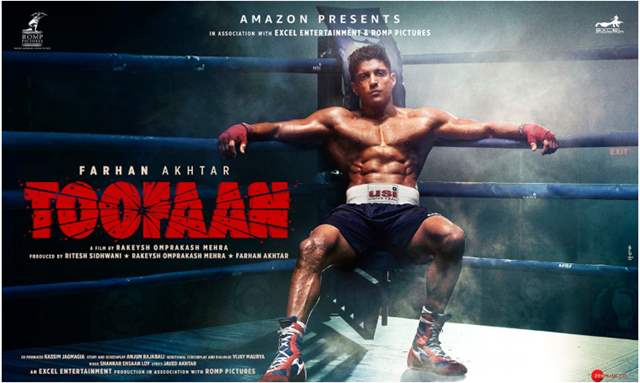 Finally, the teaser of this much-awaited film was unveiled just a few minutes ago. Taking to his social media handle, Farhan shared the teaser as he wrote, “It fills me with immense joy to give you the first glimpse of a film into which we poured all our love, passion, exuberance, madness even. It truly is a labour of love and today I am so excited to share it with you.

Farhan looks fabulous in his new avatar sporting a chiselled body. The actor has impressed the audience with his stint in the teaser of his upcoming movie and perhaps, it will be fun to see him perform the character of a boxer.

Toofaan is produced by Ritesh Sidhwani, Rakeysh Omprakash Mehra and Farhan Akhtar. The much-awaited movie stars Farhan Akhtar a goon from Dongri who embarks on a journey to become a national-level boxer, alongside Mrunal Thakur, Paresh Rawal and Supriya Pathak Kapur and Hussain Dalal.

Directed by Rakeysh Omprakash Mehra, the teaser gives a glimpse into the world of Toofaan with Farhan Akhtar packing the punches, leaving the fans asking for more! The power-packed teaser is just a sneak peek into what’s in store for the audiences.